The Music Summer Festival will energize you in August 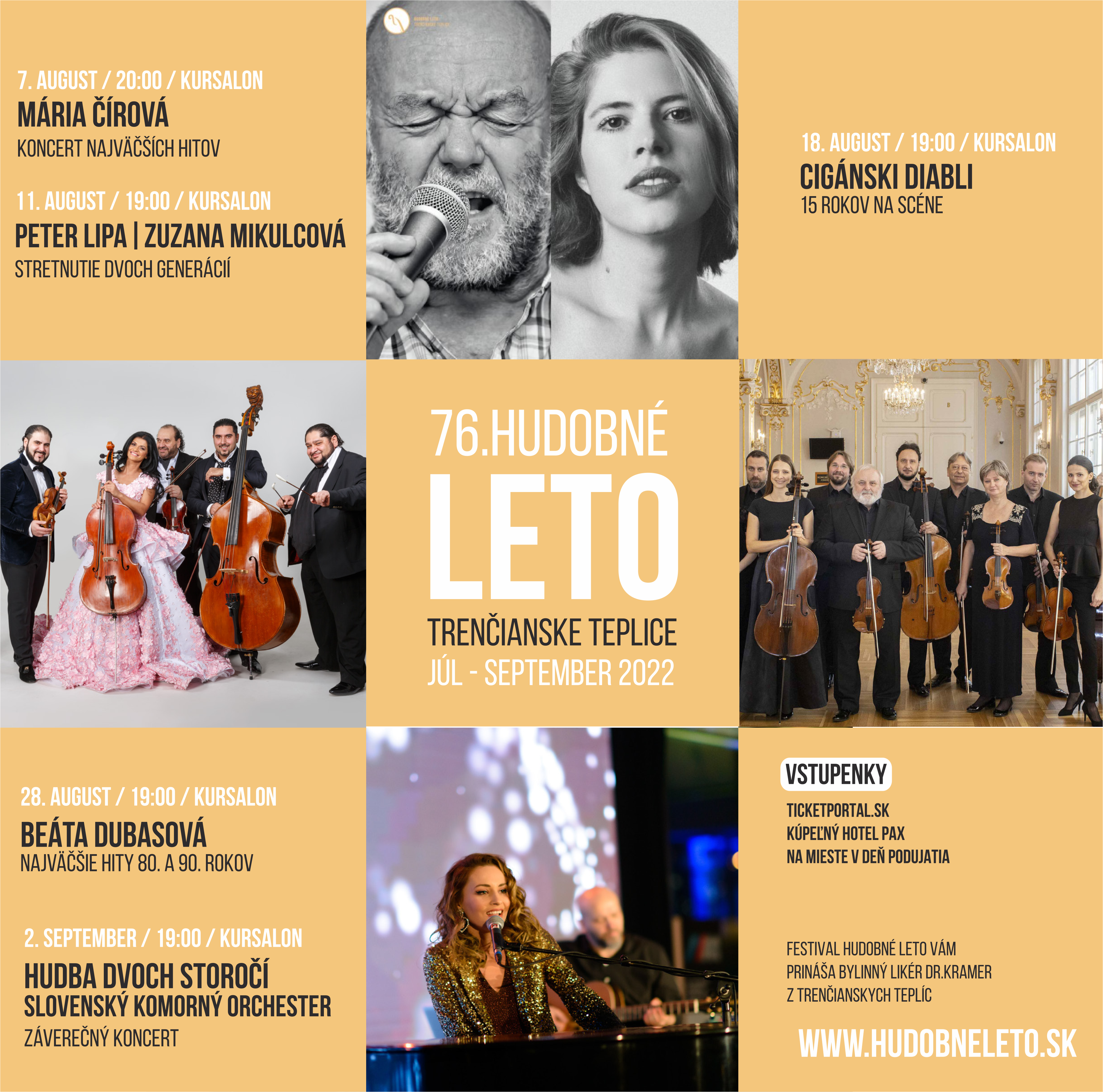 Enjoy Gypsy Devils in a special birthday edition, the deep personal confessions of Mária Čírová or the original meeting of Petr Lipa with a young talented jazz singer. The Trenčianske Teplice Musical Summer Festival also has a rich cultural program for its supporters in the second half of the summer. Exceptional concerts and shows will delight lovers of various genres, and enthusiasts of the sophisticated combination of classical, gypsy music, Etna, jazz and flamenco will also enjoy their time.

If you perceive music with your heart, you will definitely be warmed by the ballad melodies of the talented Slovak singer, pianist and composer Mária Čírová. As part of the Music Summer, he will perform already on the first Sunday of August. She achieved great success with her concert in Kursalon three years ago, and the festival organizers hope that she will delight the audience again with her deep personal confessions, such as Unique, Storm, Na dosach or Chýbaš. You can discover traces of jazz, R&B, gospel and folk in Mária's music. She writes her own lyrics and composed music for many of her compositions: one of the most famous hits, Búrka, was invented together with her husband, producer Maroš Kachút.

He will celebrate his eightieth birthday in a year, but he still has a lot of energy that even younger singers can envy. Peter Lipa will show his ageless spirit at the Meeting of Two Generations concert. Four years ago he sang in the Kursalon together with Milan Lasic, this time he will be accompanied on stage by the young Slovak singer Zuzana Mikulcová, who is already considered a promising jazz talent. Do you want to know how they will get along? Come and see for yourself at the Kursalon on Thursday, August 11.

The Gypsy Devils have been in perfect harmony for 15 years and will celebrate their jubilee in Trenčianske Teplice on Thursday, August 18. They will delight you with a rich musical performance full of passion and temperament. With the title of the best gypsy orchestra in the world and numerous gold and platinum awards, they promise an unforgettable experience. Come and enjoy the incredible virtuosity and unique musical fusions thanks to which the Gypsy Devils have received standing ovations in prestigious concert halls around the world, starting with the Royal Opera House in London and ending with the Concert Hall in Melbourne, Australia.

If you're in the mood for pop music proven over the years, on Sunday, August 28, you can enjoy the Greatest Hits of the 80s and 90s performed by Beata Dubasová at Kursalon. Once she was the idol of the teenage youth, today she is a respected singer and a constant in the Slovak music scene. He has a number of catchy and notorious songs to his credit, such as Haircuts, We are the way we are, Behind the door of my room, Vráť mi te hviztej or Girl from the advertisement. You can reminisce or discover songs that have survived the decades to become timeless pop pieces.

The festival will be closed on Friday, September 2 by the Slovak Chamber Orchestra (SKO), which also celebrated its 60th anniversary last year. The final concert of the Music of Two Centuries will be especially enjoyed by fans of serious music, who can look forward to the greats of world classics. Under the leadership of conductor and artistic director Ewald Danel, SKO will offer unrepeatable compositions that were born over a period of two centuries.