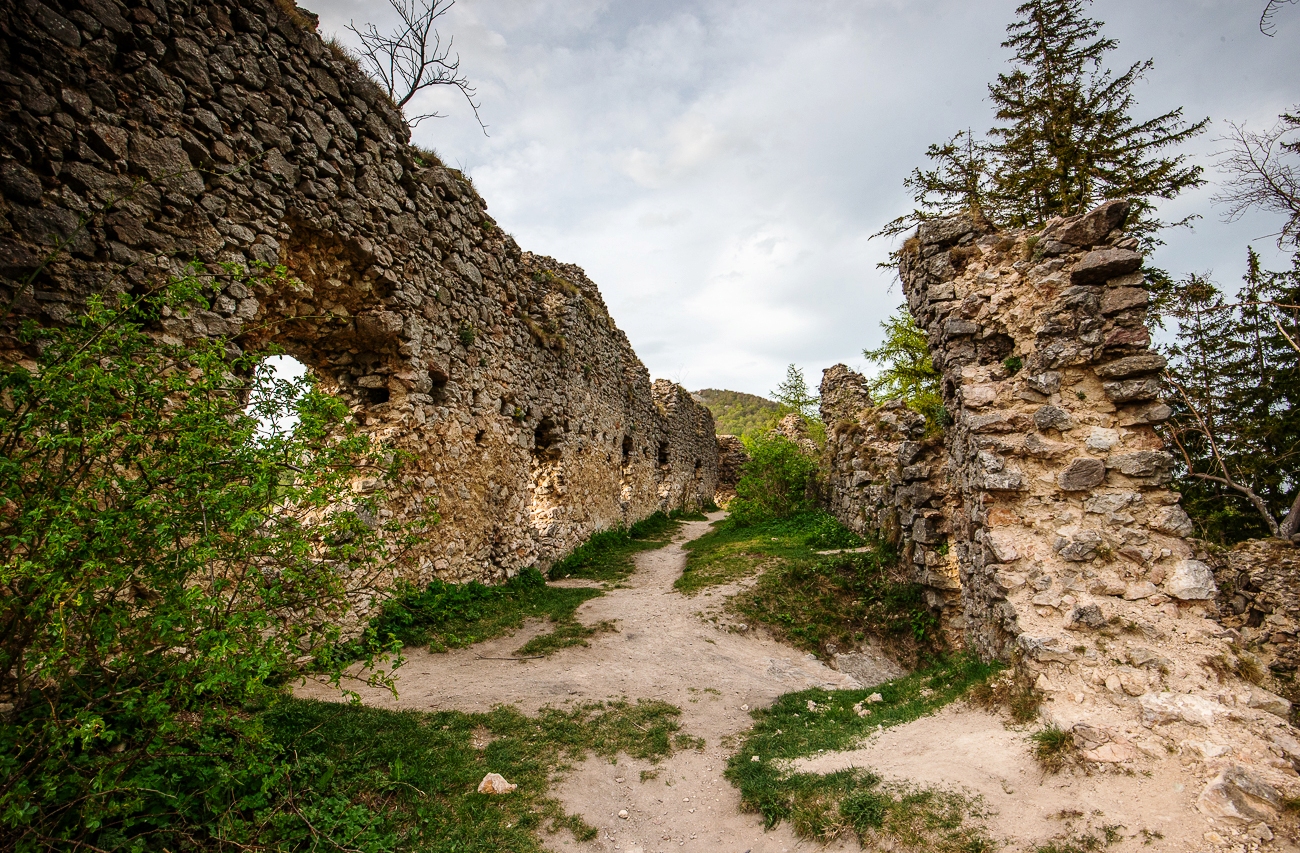 Hidden in the White Carpathians, in the northwest of Slovakia, white cliffs of Vršatické bralá features ruins of the royal castle. Walking towards the castle and enjoying impressive views you will realize that you have come to the "end of the world." The only way back is to walk the same rocky road back.

Vršatec, situated on the rock 805 meters above sea level, is one of the highest situated castles. It is an example of a medieval castle built on inaccessible limestone rocks. Vršatec was designed to guard the northwestern border of Hungary in 13th century. The hill is totally inaccessible form three sides and the individual parts of the castle are separated by a considerable elevation, thus providing the castle with a complex natural protection. Originally a Gothic castle had several owners - it belonged, for example, to Slopnaj family (later changed durname to Vršatský) for a whole century. The castle had its own bakery, a mill and a brewery. The castle was destroyed shortly after the Rákóczi uprising. After the Battle of Trenčín, in early August 1708, the imperial army attacked Vršatec castle as well. After several days of siege, the castle lord gave up and handed the castle over to the imperial army. Troops undermined the castle and blew it up to prevent it from becoming a rebel stronghold.

When conquering the castle Tatars managed to capture Vršatec’s landlord Imrich and its castellan Ondrej Budiač. When the prisoners discovered that death penalty awaits them, the faithful castellan decided to act quickly. Although shackled in leg chains together with his master, Ondrej stealthily seized an ax and suggested that he would cut off his leg to free them from chains. Imrich, moved by his fidelity, said: "You´re not my servant, you’re my brother. We fell into captivity together, we will die together." Despite Imrich’s words Ondrej embraced his master, grabbed the ax and cut his own leg off. Imrich was free and secretly returned to the castle Vršatec. When the Tartars saw the castellan’s dedication, they decided to release him. Ondrej returned to Vršatec where he lived as a member of the royal family. For his loyalty the king gave him and his descendants a yeoman title.

Castle ruins offer an excellent view of the central Považie and the valley of the river Váh with Súľovské and Strážov mountains in the background. You can get to the castle comfortably taking the nature trail or numerous hiking and biking trails.