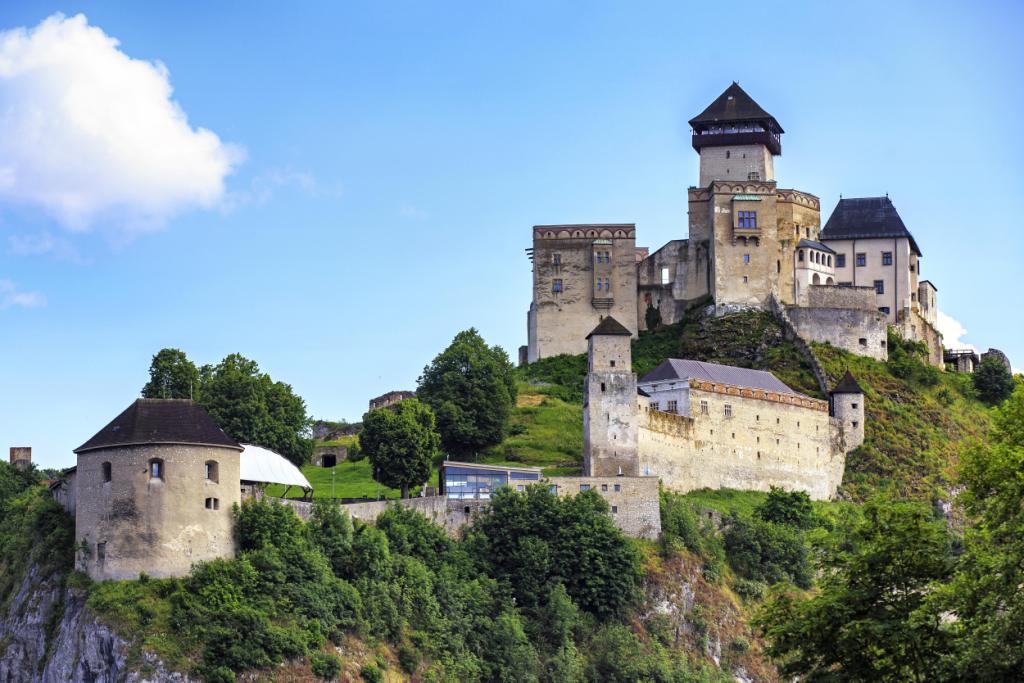 During the year 2017 it lived in the Trenčín castle. In addition to interesting events, visitors had the opportunity to inspect the Matus Tower's renovated premises, or to check the accuracy of the hours at Matej's Tower for decades.

Trenčiansky castle as the city's dominant city attracts thousands of visitors every year, not only from the whole of Slovakia but also from abroad. Trenčianske múzeum v zakladateľskej pôsobnosti Trenčianskeho samosprávneho kraja (TSK), as manager of the castle, organized in 2017 several new events, which in the given form never before at the castle were held. The Dragon Day , during which children with their parents wandered in the Castle of Sharkans or the Kingdom of Svetlonos, cutting fruit and vegetables, took both small and large visitors. "This year's tours have been staged, titled" Chip of the Past. " Visitors had a regular tour on a weekend with fun and playful scenes with a historical context, "said Michael Tíšková, marketing and promotion of the Trenčín Museum.

In addition to the above-mentioned events, the Hradná detektivka, Dinner for Children, Trenčiansky hradeníky, Creative Workshops for Children and awarding the Edinburgh International Prize of the Duke took place at the Trenčín Castle. "We are planning next year's next events, which until now have not been able to see the visitor. They can be prepared for many skilled people, craftsmen or quality musicians, "added Michaela Tíšková.

Thanks to the new attractive events that took place during the year at the Trenčín Castle, the Trenčín Museum managed to exceed the 120 000 visitors for the second year consecutively, and the month of December is not included in this figure. The highest visitors to the castle have traditionally been in the summer months. The popularity of Trenčín Castle among the public also shows a success in the form of profit of the Excellence Certificate from TripAdvisor for 2017 . This award has been awarded for the past seven years as a recognition of tourist facilities that have been receiving positive reviews from travelers on this web site over the past year.

During the year Trenčiansky castle has enriched its historical premises

In 2017 Trenčiansky Castle underwent several reconstructions. After a decade of inactivity, half of the year all the clocks on Matthew's Tower were brought to life. "The idea to revive the clock at Matej's Tower comes directly from the visitors of the castle. "We have been working on the idea to run the clock for a long time," said Zoltán Lancz, a master of the clock, who offered us his services ", explains Peter Martinisko, Director of the Trenčín Museum in Trencin. Historical clocks from the sixties for Trenčany and visitors to the town and castle show the exact time.

Modifications and redevelopment also covered the basements of Kat's House . During the summer months, they turned into a café called On the Road . A cozy café in the Katovho House's basement, which is also a sheltered workshop, was opened in early September. Serving people with mental disabilities. "The café was set up and also run by the Rotary Club Trencin Laugarício. Waiters with a disability in the café work under the supervision of the assistants who care for them, "said club president Hana Tisova. Free space for the purpose of the café was provided by Trenčianske múzeum v Trenčíne only for the price of energy to help good things.

Changes have also been made to the interior of the Matus Tower , which has been redeemed. Under the bad condition of the interior, the fact that the tower visits more than a hundred thousand visitors annually. The walls of the staircase and the individual floors of the tower were gradually degreased, repaired and painted before reconstruction. In November, the reconstruction of the Portal Gate in Barborin Palace began.

New open spaces and a cycle path from castle to castle

Thanks to the cross-border projects of Trenčín's self-governing region such as TreBuChET - Trenčín, Bučovice, We Protect European Traditions and Bicycle Tracks, visitors are also interested in other interesting news.

The joint project of Trenčiansky samosprávny kraj , Bučovice in the South Moravian Region and the city of Trenčín under the name TreBuChET will make available to the public those parts of the castle which until now have not been able to see visitors. The reconstruction will be followed by the south fortification of the Trenčín Castle and the access path with the educational trail from the Memorial tortured to Brezine through the Cherry Orchard.

On the track in history is a joint project of TSK with the town of Brumov-Bylnice in the Zlín Region. The aim of the second cross-border cooperation is to build a new cycle route between the towns of Nemšová and Trenčín, with a newly built cycle route connecting the Brumov-Bylnice project with the village of Horné Srnie and the town of Nemšová. By combining two cyclists in the future will get from the gate of the Trenčín castle to the castle Brumov.