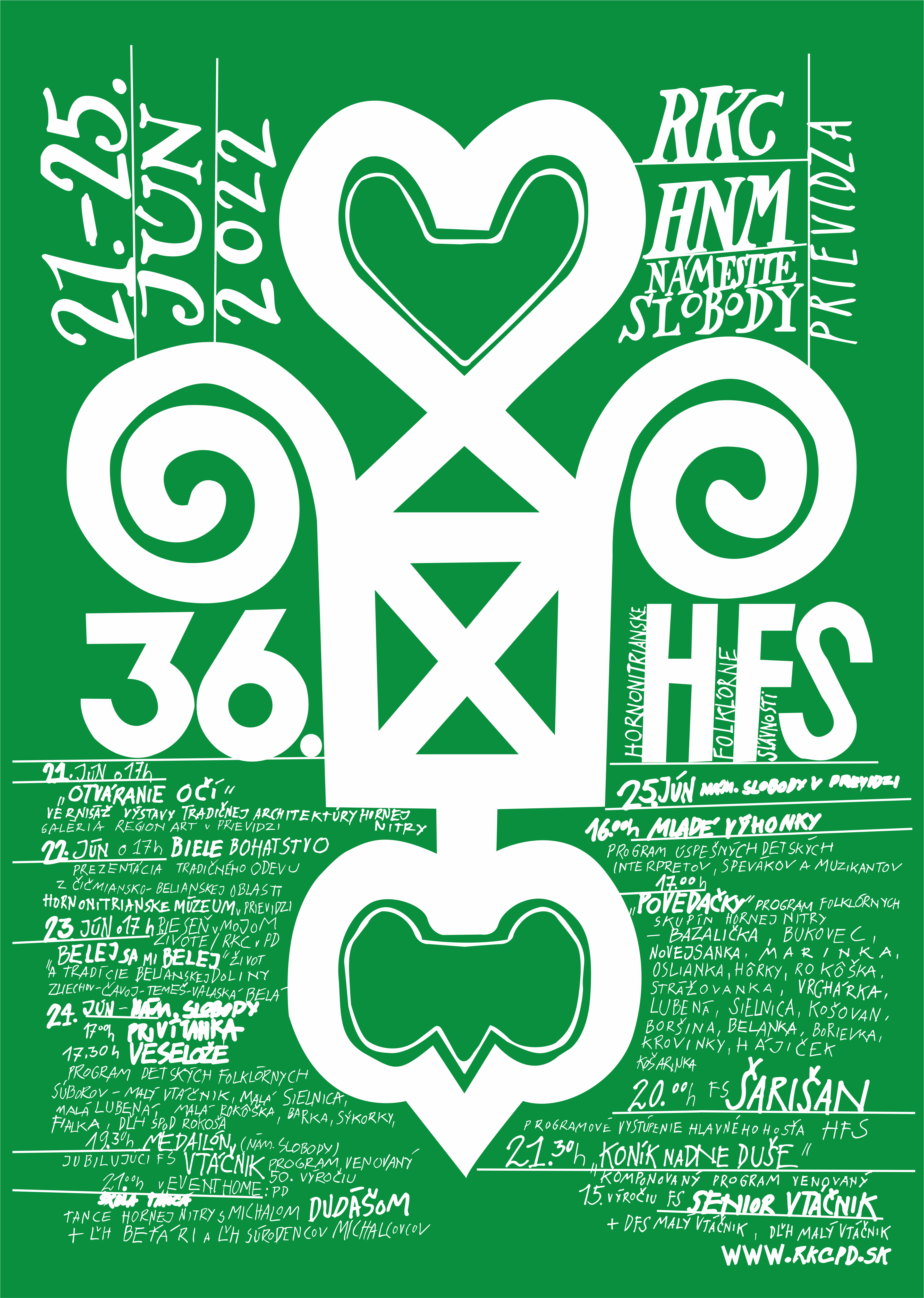 Traditions, past, life of our ancestors, folk songs, dances, traditional clothing, crafts, customs. Shards that are engraved in our souls. Let's open our eyes and discover them, because they can help us find our roots and maybe ourselves.

The Regional Cultural Center in Prievidza is preparing the 36th Horn of Nitra Folklore Festival from 21 to 25 June 2022. This year, the festivities will take place right in the center of Prievidza on the Freedom Square. This generous space will offer the opportunity to present itself to folk craftsmen and folklorists from the entire region of Upper Nitra.

The festivities will continue on Wednesday, June 22, 2022 at 5:00 pm with the presentation of the traditional clothing of the White Wealth region of Čičmiansko-Beliansko in the collections of the Upper Nitra Museum in Prievidza. On Thursday, June 23, 2022 at 5:00 pm, we will learn more about the life and traditions of the Belianske Valley at the Regional Cultural Center in Prievidza. Members of the folklore groups Strážovanka from Zliechov, Belanka from Valaská Belá, Vrchárka from Čavoja and Košarinka from Temeša will present themselves in the chamber program A Song in My Life called Belej se mi, belej. The director of the program is Anastázia Kubová.

The main program of the 36th Upper Nitra Folklore Festival , which will take place on the Freedom Square in Prievidza, will be opened on Friday, June 24 at 5:00 pm by the director of the Regional Cultural Center Ľudmila Húsková together with the mayor of Prievidza Katarína Macháčková and chairman of the Trenčín self-governing region Jaroslav Bašek, who took over the patronage of the whole event. The performance of children's folklore ensembles and children's folk music called Veselože will start at 5:30 p.m. You can look forward to DFS Malý Vtáčnik, Malá Lubená, Malá Sielnica, Malá Rokôška, Fialka, Barka, Sýkorky and DĽH spod Rokoša. The directors of the program are Eliška Hrbíková and Milenka Fábiková. At 7.30 pm, the program will continue with the FS Vtáčnik z Prievidze Medallion on the occasion of the 50th anniversary of its founding under the leadership of Tomáš Bakyta. The end of the day will belong to the Dance School, which will start at 21:00 in Event Home Prievidza with lecturer Michal Dudáš. ĽH Beťári, ĽH siblings Michalcovcov and ĽH FSk Lubená will play in the dance.

The 36th year of the Upper Nitra Folklore Festival will include a craft fair connected with creative workshops and the traditional cuisine of Upper Nitra.

Come to a festival that offers the richness of our past, the strong spirit of the present and the heritage of our future.