Ecological bench postcards in other towns of the Trenčín region 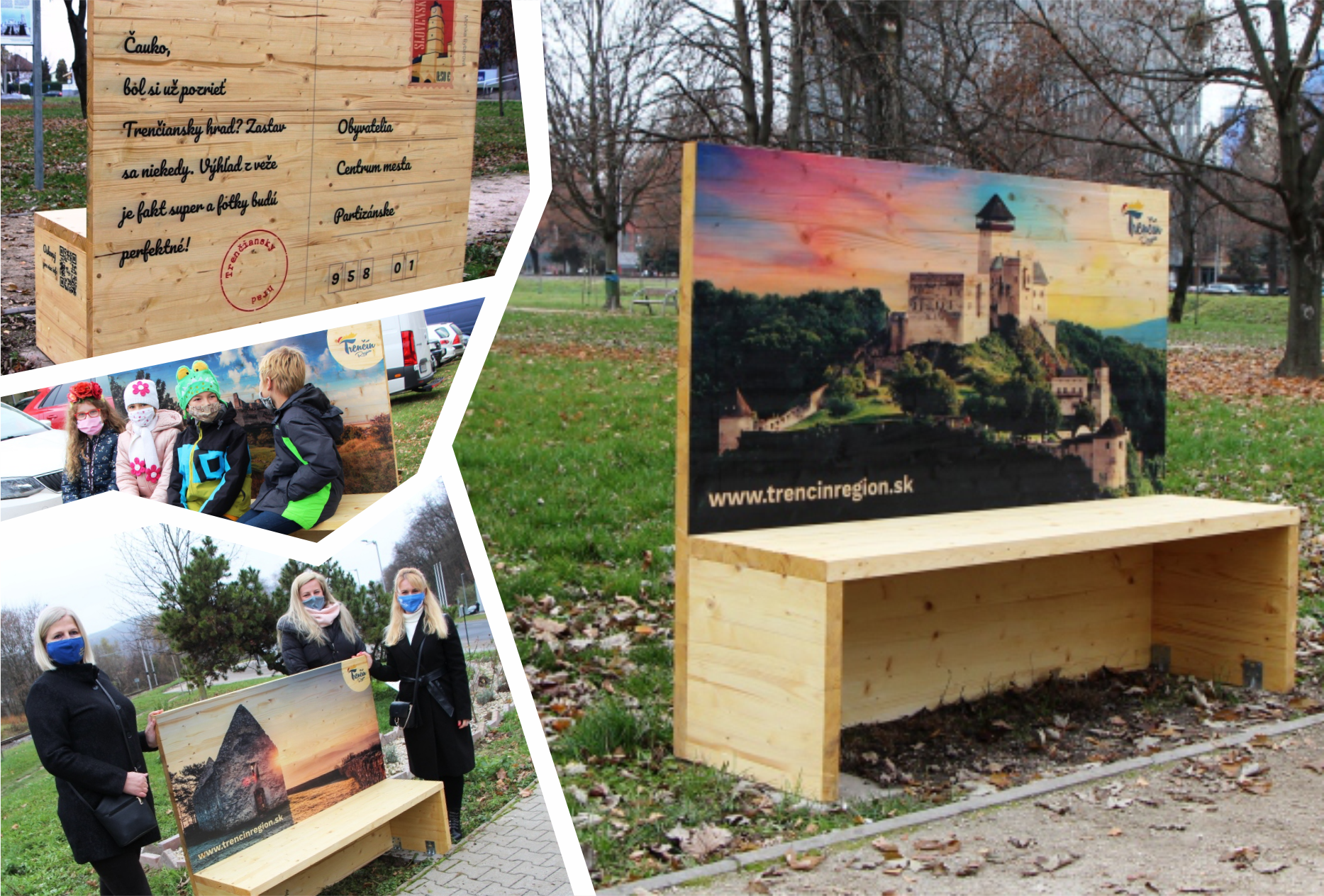 Already in 2019, the regional tourism organization (KOCR) of the Trenčín region came with an unconventional invitation to visit the dominants of the Trenčín region. She sent a postcard to the inhabitants of Nová Dubnica, Púchov and Nové Mesto nad Váhom on a bench made of wood, without the use of nails.

On the one hand, it depicts a landmark located in the region and, on the other hand, encourages locals to visit. So far, the benches have been located in Nová Dubnica, Púchov, Trenčín, Partizánske, Bánovce nad Bebravou and Nové Mesto nad Váhom. Today and tomorrow, Bojnice, Beckov, Trenčianske Teplice, Považská Bystrica and Brezová pod Bradlom will join these towns.

The public is beginning to notice the new benches and appreciate the idea. "We are very pleased with the positive reaction of the cities we addressed in connection with the ecological bench postcard project. Not only the cities, but also the inhabitants of the given localities praise the benches and like to take pictures with them. We believe that they were also encouraged to visit and explore the beauties of the Trenčín region, " said the chairman of KOCR Trenčín region, Juraj Gerlici .

Mutual support for the regions

One of the meanings of the benches is also the support of regional tourism. The graphic visual and the chosen landmark are always assigned according to the distance of the monuments from the given place so that the journey by car takes at most an hour. In this engaging and visible form, the population is told that many beautiful monuments are at their fingertips.

" The idea of the project is to connect individual regions, a presentation of important cities in the Trenčín region. A bench has just been installed in Trenčianske Teplice, which promotes the Romanesque church in Haluzice, and Trenčianske Teplice will be promoted in this way in Brezová pod Bradlom. We chose the location because of the proximity of a busy bus stop, thanks to which many people can walk around the bench every day, " said the mayor of Trenčianske Teplice, Zuzana Frajková Ďurmeková .

However, the benches cannot be denied even their aesthetic element, which often beautifies and completes the urban space. "We welcome this activity in our city and we are glad that we can promote the dominants of the Trenčín region in such a visually appealing form. We believe that passers-by will catch the eye of passers-by and they will be happy to visit the depicted Skalka nad Váhom, " commented the mayor of Bojnice, František Tám .

The bench in Beckov is positioned to offer residents and tourists a view of the wide countryside. "From this place is a unique view of Beckov Castle and its division. There is also a unique view of the Veľká Javorina hill, the entire White Carpathians, Považie and the so-called Beckov Gate, where Váh leaves the Považské Podolí basin system and enters the Danube Plain, " said the mayor of Beckov, Daniel Hladký .

Pupils were also involved in the project

The postcard placed on a wooden eco bench, in addition to the text and the addressee, also contains a specially created postage stamp. "Pupils of the Secondary School of Arts and Crafts in Trenčín took part in its creation, and we thank them for their willingness and cooperation," said Eva Frývaldská , Executive Director of KOCR Trenčín Region. In addition to it, there is also a QR code on the bench, which directly links to the website www.trencinregion.sk and for more detailed information about the monument.

In addition to the fact that the bench is not formed and connected by nails, the ecological legacy is completed by the used materials, varnishes and paints, which do not contain chemical alternatives. The benches were financed by a subsidy from the Ministry of Transport and Construction of the Slovak Republic.