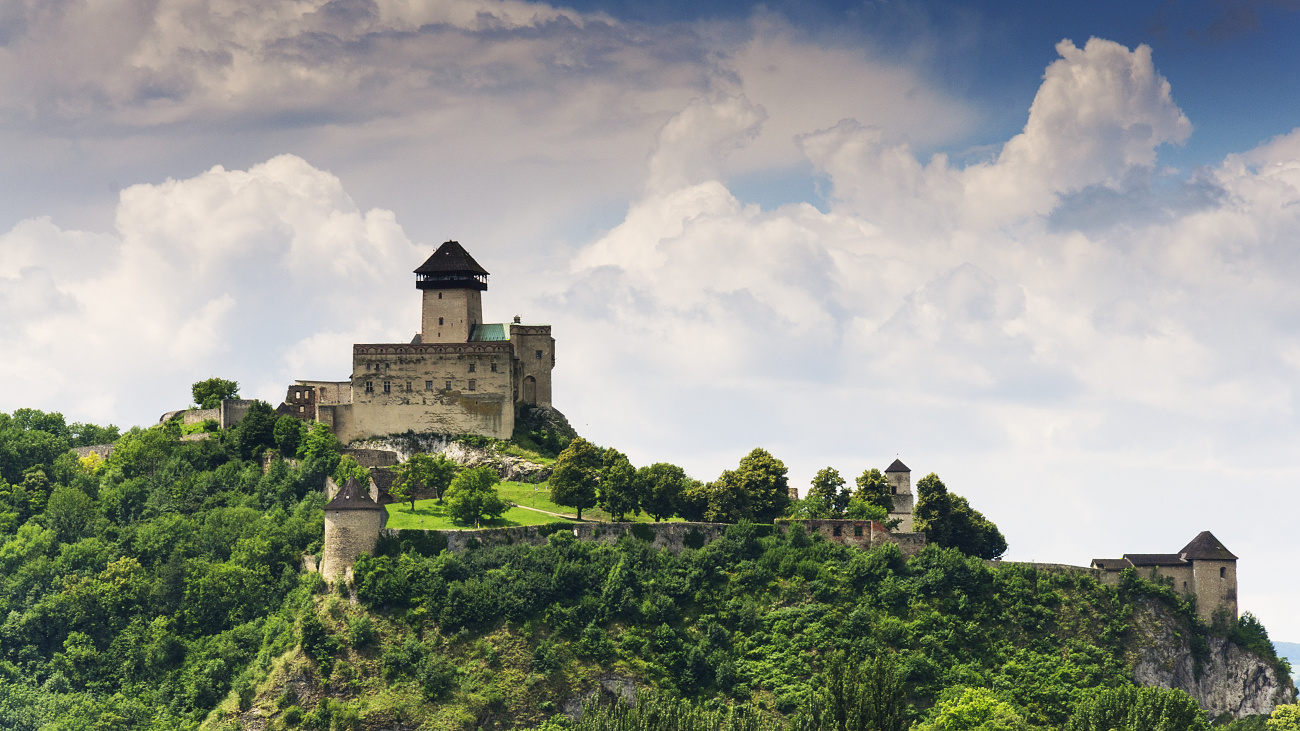 The dominant feature not only of the city of Trenčín, but also of the entire Trenčín region is a place where people go for exploration, relaxation, romance and new, great experiences. Every year, the castle prepares interesting events that attract thousands of visitors from all over the world. In addition, it has the opportunity to buy a tour of the castle alone or with a guide, which is often loaded with surprising facts.

The castle certainly does not lose its charming character and interest, as evidenced by the fact that in a large reader poll "Heart of the Nearest" won first place in the castle category and second among all nominated facilities from the Trenčín region with a total of 628 votes.

This year, the most important name for the castle is Matúš Čák Trenčiansky. Peter Martinisko, director of the Trenčín Museum in Trenčín, told us in an interview about what context and what will happen.

1. The year 2021 is the year of Matúš Čák Trenčiansky for Trenčín Castle. What have you prepared for visitors on this occasion and what can they look forward to during the year?

We are preparing several news for visitors, a number of events and activities which, as you have already indicated, will be thematically connected with the most famous owner of Trenčín Castle.

Already in April 2021, the Trenčín Museum in the Barracks at Trenčín Castle plans to open a unique exhibition "The Lord of Libra and the Tatras". It will introduce not only Matúš Čák Trenčiansky himself, but also the time in which Matúš lived. The children will certainly be thrilled by the armor of the soldier who served in Matthew's army.

On the occasion of the 700th anniversary of Matúš Čák's death, a commemorative souvenir euro banknote with a zero face value was issued by the Trenčín Museum. The banknote with a portrait of Matúš Čák Trenčianský, with a castle from the period of Matúš's reign and his family coat of arms is made of cotton paper as original euro banknotes and contains security features such as a watermark, hologram, UV security features, security strip and more. We plan to start selling the banknote at the same time as the opening of the "Mr. Váh and the Tatras" exhibition.

Events named after Matúš Čák will imagine visitors to the period in which Matúš ruled. The summer tourist season will be opened by the period Matúš Castle festivities at the end of June. Other upcoming events will briefly mention summer fairytale trips for children, craft days, unique night shows for children and adults with scenes or knightly weekends.

In August, a part of the exhibition "Lord of Libra and the Tatras" will be a rare exhibit - a gilded copper herm, which is supposed to be the originator of many portraits of Matúš Čák Trenčianský. At present, the hermitage is located in the Hungarian National Museum in Budapest, which was donated in 1812 by the free royal city of Trenčín. Based on the local legend, which claimed that it was a bust with a depiction of Matúš Čák, several portraits of Matúš were created, which are part of the collection of the Trenčín Museum in Trenčín. The largest one will take its place in the mentioned exposition. Visitors will be able to admire it and compare it in one month with the hermit, which will return to Trenčín after 209 years.

During this year, we plan to give several lectures for museum visitors related to Matúš Čák Trenčiansky. Their goal is to bring the personality of the palatine closer to the public.

The culmination of the Year of Matúš Čák will be the autumn professional conference “700. anniversary of Matúš Čák Trenčiansky (1321 - 2021) “. Its date is scheduled for September 23 - 24, 2021 at Trenčín Castle. The conference will feature lectures on topics related to the political situation and economic conditions during the reign of Matúš Čák. An interesting subject of lectures will certainly be the topic of the personality of Matúš, the Čák family, the development of society in the time of Matúš from the point of view of archeology, etc. The lecturers will be important Slovak historians and personalities who are among the experts on the Middle Ages. Younger colleagues who have brought new stimuli to the research will also be given space.

The planned dates will also be adapted to the pandemic situation, so it is necessary to monitor the website of the museum and the social network of Trenčín Castle, where we will bring visitors up-to-date information.

2. What do you think makes you stand out from other castles? What made you so popular with the public?

Trenčín Castle has an extremely good location, proudly towering over the city. The former residence of Matúš Čák is an ideal place for romantic walks connected with learning about history. It offers a unique view of the city of Trenčín and its surroundings, as well as the possibility of exploring the mysterious areas of the castle, which houses several expositions of the Trenčín Museum. Its castle gorge is decorated with an inscription from Roman times. The well-known legend about the Well of Love is also connected with Trenčín Castle. Trenčín Castle is a venue for historical events for the whole family, concerts, conferences, lectures, social events and weddings.

3. In addition to the activities connected with Matúš Čák, are you planning interesting events or other attractions for this year?

Other interesting events will also apply for public support. The attraction will be a period camp with falconers and their predators, theater performances, an ABBA Symphonic show concert, an IMT smile concert or the autumn Devils at the Castle event. The interest of children will certainly be stimulated by the exhibition of pedal retro cars. In cooperation with the Old Herold company, we are preparing the exhibition "100 Years of the Trenčín Liqueur", which should be open to the public from May to September this year.

A significant event last season was the ceremonial opening of the period apiary and the settlement of seven massive period hives at Trenčín Castle. We are already looking forward to educational activities directly in the apiary, which will point out the importance of bees and support the idea of saving them.

The most important milestone of last year, however, is undoubtedly the opening of the southern fortifications of the castle from the forest park Brezina, which was renovated as part of the international project TreBuChET - Trenčín, Bučovice, Protecting European Traditions. Thanks to this project, Trenčín Castle, with its size available to the public, has become one of the largest accessible in Slovakia. The museum soon plans to open a new separate entrance for tourists with a cash register, to which visitors will be able to travel in the future by a tourist sightseeing train.

In cooperation with the regional tourism organization Trenčín region, we will also make a 3D tour of Barborin's palace available in April using the most modern technologies. It is a unique pilot project, which has not yet been implemented at any castle in the Trenčín Region. The visitor to the castle downloads the mobile application to his mobile phone and, thanks to it, views the premises of Barborin's palace in augmented reality. Currently, the empty space will be filled with period furniture, coats of arms, armor or even "living" figures of Hedviga Tešínská and her son Ján thanks to 3D objects. The application also contains interactive games and audio commentary in 3 languages. We believe that this application to the castle will attract enthusiasts of virtual reality and modern technology.

4. How do you expect the attendance of the castle to develop this year?

Trenčín Castle, like other castles and chateaux, has been closed since December last year. We do not dare say when we will open the castle, but we want to be very optimistic and we hope that from the end of April - the beginning of May we will be able to make its premises available to the public.

Unfortunately, we do not anticipate a growing trend and record traffic from previous years. We anticipate limited accessibility due to epidemiological measures, which will be reflected mainly in educational activities for school groups, workshops, but also in events, concerts, mass events and castle tours. We can already say with certainty that the decrease in traffic will also reflect the reduced number of foreign visitors.

5. What unique names have they already visited Trenčín Castle?

6. Does Trenčín Castle also have filming or other interesting projects behind it? Do you welcome such projects in the future?

In addition to curious visitors or foreign tourists, film crews of various televisions or organizations can also find their way to Trenčín Castle. The fairy-tale environment and the history that breathes on you at every step attract filmmakers and series creators, children's and youth programs, as well as wedding filmmakers, who are used to taking place in castle grounds, especially in the spring, summer and autumn months. The last time filmmakers visited us was during a documentary about Jánošík or the actors of the series Nový život.

In August, Trenčín Castle was discovered by the winners of a competition announced by one of the telephone manufacturers who took part in a guided tour of the castle with Sajf. The castle offers new corners of the magnificent southern fortifications, which have not yet been discovered for filmmakers. Just discover them.

7. In connection with Trenčín Castle, do you have any "unfulfilled dream" that you would like to realize?

I hope that we will be able to realize the great castle games in the South fortifications, which is created for that. We have been working on new castle lighting for a long time, we want it to be not only aesthetic, economical, but also ecological and not unnecessarily illuminate the sky or the landscape. We have also prepared a new project for the exposition in the Zápoľské and Ľudovít palaces, unfortunately the current situation postponed for several years.

8. In the readers' poll closest to the Heart, you won 1st place in the category of castles and 2nd place overall with 628 votes. What do you say to such strong public support?

We are very pleased with the location of Trenčín Castle in the reader poll "Nearest Heart" in such an excellent place. And all the more so because the winners were decided by the general public, which can be very honest, demanding and critical. This nice award is proof that Trenčín Castle, as the dominant feature of the Trenčín region, is a popular historical monument.