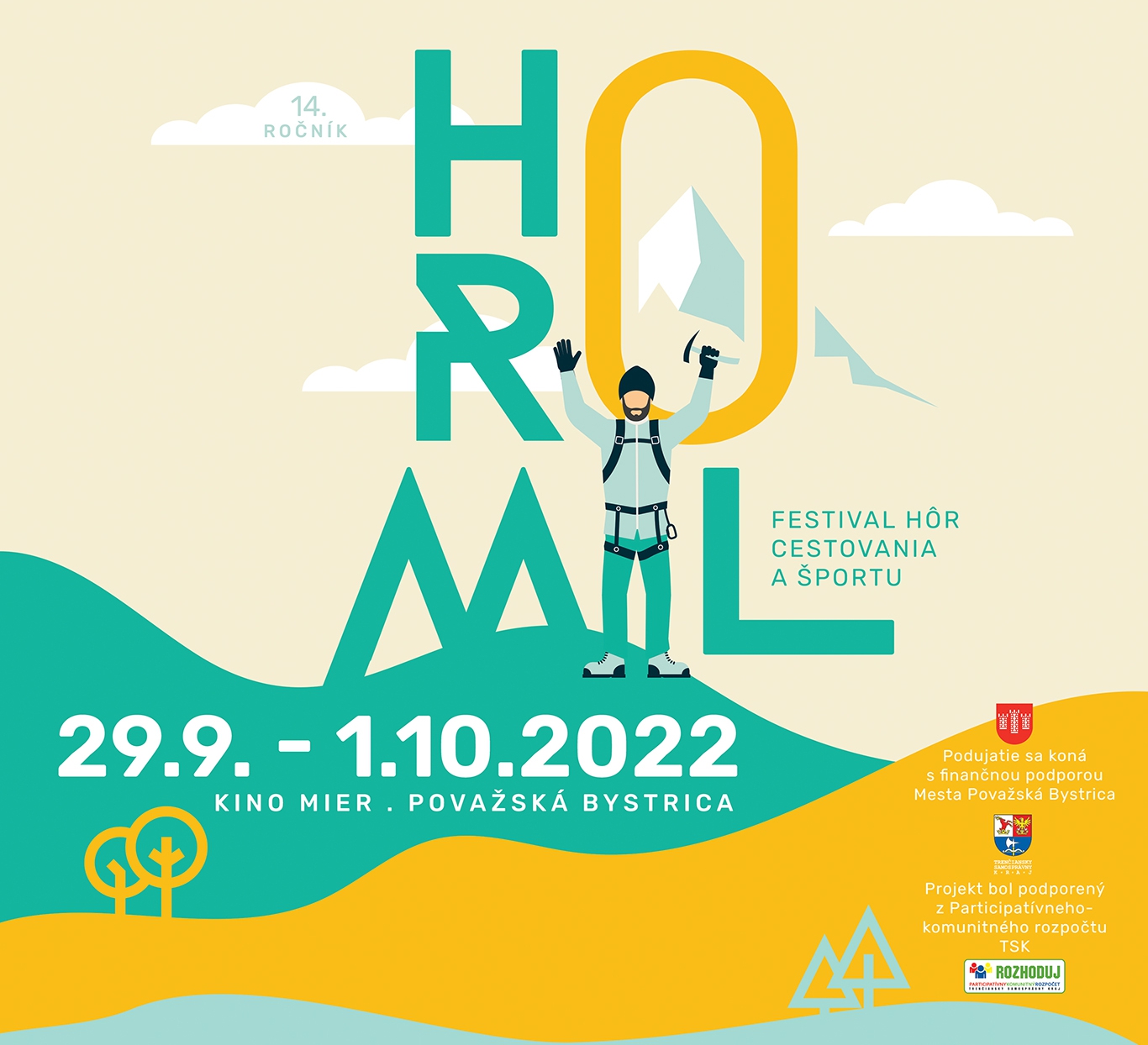 From September 29 to October 1, 2022, the 14th edition of the Horomil Fest will take place in Považská Bystrica. It is a holiday for all lovers of mountains, travel and sports, which takes place every year in the premises of Kina Mier. After two years marked by restrictions due to the coronavirus pandemic, the organizing team is happy that the festival is getting back on track and that the audience will be able to enjoy the program to the fullest without restrictions.

Bears in Slovakia and an Olympic medalist

Are there too many bears in Slovakia, or has their behavior just changed? We will open the Saturday program of the Horomil Fest with this extremely topical topic in a debate with the director of NP Malá Fatra, Michal Kalaš, about nature, its protection, but also about large animals. The organizers have long been trying to bring meetings with top Slovak athletes to Horomil Fest, which they see as a small miracle and a dream come true. The former elite skier Veronika Velez-Zuzulova, who will tell the audience about her journey from a block of flats to the top of the world in skiing, will be joined this year by the silver medalist from the Olympic Games in Tokyo 2020, water slalom runner Jakub Grigar. "Both of them surrendered absolutely everything to their dream, so their story can inspire the next generations of young athletes," says one of the organizers of the festival, Martin Holeš. Traditionally, the evening block will close with the latest film by the popular Slovak documentarian Pavel Barabáš. "Pavel Barabáš's films are among the highlights of our festival and are extremely popular with the Pavažská Bystrica audience, who have been praised several times by the director himself," concludes Martin Holeš. The protagonist of the film is Zoltán Demján, known primarily as the first Slovak to climb Mount Everest. However, he himself considers the first ascent of Dhaulagiri to be his life's achievement. Not only because it was more technically demanding, but mainly because it was there that he received a breakthrough knowledge that showed him a new path in life. The audience will learn about his visions, life philosophy and path of sustainability in the new film by Pavel Barabáš - Dhaulágiri is my Everest.

The Thursday block of the festival is traditionally dedicated to natives of the nearby Považská Bystrica area. "It never ceases to amaze us how many "worldly" young people such a small town as Považská Bystrica can produce," adds Juraj Lukáš, another of the organizers. Among them is Pavažskobystrica astrophotographer Ondrej Králik, whose photographs of stars and the night sky have been appreciated even by the American NASA, and on the big screen of the Mier cinema, they will certainly take the breath away of the festival's audience. No less interesting will be an adrenaline ride with the current champion of Slovakia in downhill mountain biking, Rasťa Baránek, also a native of Považská Bystrica, where he still lives and trains. And the evening of natives will be closed by the always positive mood, Ľuboš Ďurica and Petra Kozejová, who have traveled halfway around the world for experiences together.

There will be a small holiday at Horomil Fest on Friday. "After several years of effort and searching for a combination of free dates, we managed to invite the first and probably the only Slovak cosmonaut for a long time, brigadier general Ivan Bella. Mr. Bella will tell the audience about his journey into space, what all preceded it and whether he really took a bottle of pine with him" , adds Juraj Lukáš with a smile. You can't travel further than space, but the most traveled Slovak, Martin Navrátil, experienced the world "as if from another planet" in Afghanistan, where he arrived a year after the Taliban coup. How do you live in a country ruled by extremists, in a country where girls are excluded from schools and people in need sell children? The premiere of the presentation of this well-known traveler will provide the answers. A more serious topic is replaced by a more cheerful one, although it may not seem so at first. Fate played a game with Maroš Kudlík when, as a teenager, he was diagnosed with an illness, as a result of which he lost his leg. He faced his health problems with his head held high and decided to motivate other people and showed them that it is possible to progress in sports or in any other area of life and that a handicap no longer has to be an obstacle or an excuse. From the Horomil Fest stage, Maroš will continue to Košice, where he plans to run the Peace Marathon. The audience will first watch a film about his great passion, the well-known Spartan Race, which he completed 37 times himself, and later they will hear why Maroš's motto is the belief that he wins in all circumstances and never loses.

After a break from some accompanying events, Horomil Fest will also bring completely new activities for the whole family. "Sunday belongs to outdoor fun, and this year will be no different. In addition to making the Dúpna Cave accessible, or the opportunity to try the climbing wall for free, we invite viewers to a guided tour of the renovated mansion in Orlovo. The exposition will also include various points of interest related to the rebuilding of the manor house, and those interested can take a photo in period costume and keep a fond memory" , explains Marek Janičík. But the offer of accompanying activities does not end there, during the entire festival an exhibition will be installed in the trees near the Kine Mier, where viewers will get a glimpse into the life of coffee growers in Colombia through photos and stories.

You can find more information and the complete program of the festival on the horomilfest.sk website