The summer game Matthew&#39;s Land has its winners

The Regional Tourism Organization (KOCR) Trenčín region has traditionally prepared a competition for the summer, which took tourists to the most interesting places across the Trenčín region. In this case, the competitors in the period from 15 July to 15 September 2021 got to know 12 unique locations and also the story of Mr. Váh and the Tatras - Matúš Čák Trenčiansky. The competition called Matthew's Land was held in the spirit of this Hungarian nobleman, in honor of the 700th anniversary of his death.

The conditions were not simple

Registered competitors had two months to manage the relatively demanding tasks that KOCR Trenčín region prepared for them. After registration, they received a headband with a crown design. She accompanied them around all the places of Matúš's estate, which needed to be visited and a photograph taken with a crown on her head. To make matters worse, part of the competition was to answer knowledge questions. Their answer could be found only after visiting a specific place. As part of their tasks, the competitors also had to get on a bicycle and conquer a section of the Vážská Cyklomagistrala and bathe or cross the Váh River. After successfully overcoming the challenge, the contestants uploaded photos and answers to the competition website www.matusova-zem.sk.

"I am very pleased that the opportunity to get to know the Trenčín region, the history and the former estates of one of the most famous nobles in our history, in an entertaining way through the game, appealed to tourists from various places in Slovakia, not only from our region" , said the chairman of KOCR Trenčín region. Juraj Gerlici .

"A total of 249 competitors took part in the competition, who proudly wore Matúš's crown on trips. Despite the complexity of the tasks, 25 competitors managed to meet this challenge, " said Eva Frývaldská, Executive Director of KOCR Trenčín Region.

The reward for mastering the tasks were valuable prizes

The winners were drawn by Matúš Čák Trenčiansky

The draw of the winners, which was taken over by Matúš Čák Trenčiansky himself, took place on October 1, 2021 at a significant place - in the exposition dedicated to the Lord of Váh and the Tatras at Trenčín Castle. All winners will find out about their prize from the video recording of the draw, which will be published on the websites www.trencinregion.sk, www.matusova-zem.sk and the Facebook page Trenčín region.

You can find the video in the gallery. 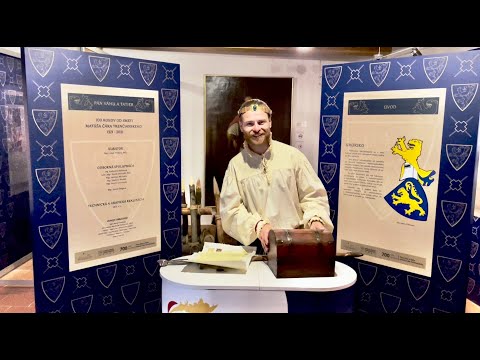