Fifteen guys in one Shell 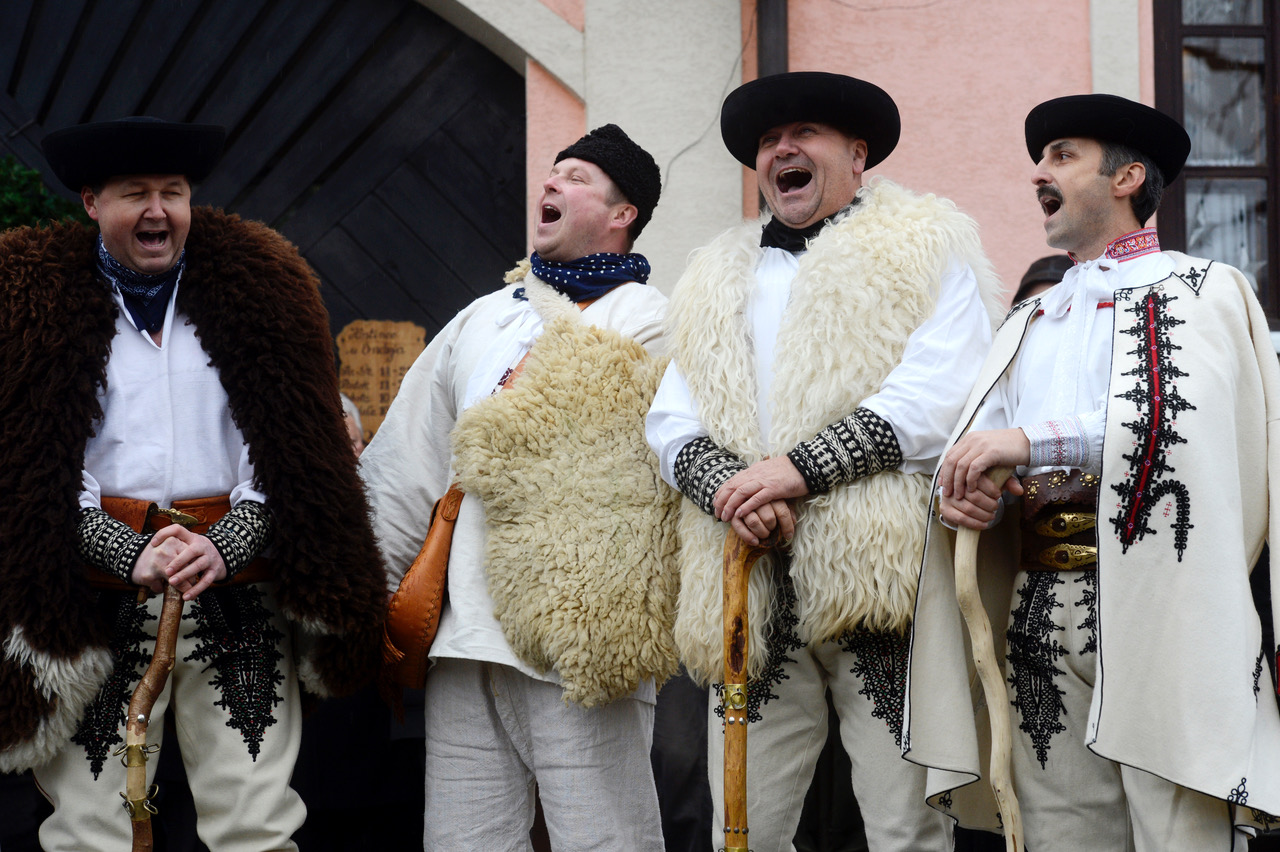 "Hey valley, behold the newspaper, God sent us his Son, in Bethlehem on a straw ..." are strong boyish voices. We also listen to them in Soblahov during the Štefanska ride. A group of folklorists "heartmakers" brings the Christmas atmosphere directly to us and the tones of their songs evoke chills. And how do folklorists themselves experience Christmas days? We asked the members of the Škrupinka group, Vladimír Mišík and Jozef Ďuráč, about this.

In the full season, one performance alternates after another. December weekends are full in the diary and there is no shortage of performances even on weekdays. For the public, Christmas markets or Christmas performances mark the beginning of the holidays. And what about folklorists? When will they indulge in a Christmas break?

"On the one hand, it is time-consuming, especially if, in addition to performing in Škrupinka, I also devote myself to the children's ensemble Kornička. On the other hand, it is relaxing, "says folklorist Vlado Mišík. He is happy to give the audience joy and start the Christmas atmosphere. Performers on stage can enjoy and enjoy every performance.

When he comes out, he doesn't clean up

"Everyday problems go to the background, I don't even have to clean that much at home," he jokes. Either way, the pre-Christmas period is full of magic. Škrupinka forms a repertoire of materials from his own research, or the research of Jožek Ďuráč, who is their leader and choreographer. They study songbooks and codes, archaic recordings of songs. Folklore is literally a science, and before the fifteen men stand in front of the audience, the performance must have a head and a heel. "By treating a topic such as Christmas in this way, it is assumed that the habits will be moved at least one generation further," the folklorist thinks, believing that songs and carols will not disappear in this way. "Tradition itself has changed. In the past, carolers used to go and sing from house to house, now the audience will come after the carolers to perform together. "

They taught the boys Bethlehem carols and walked around the village like Kubo, Bača, Fedor and Stacho from family to family. "When the scene was supposed to take place on stage, it looked completely different after this experience. They knew how to imagine it spatially and get used to the atmosphere that prevails, "adds Jožko Ďuráči.

How did Škrupinka come about?

The caroling with Kornička culminates every year with a performance called We bring you an abundant blessing. For many viewers, this is the moment when Christmas definitely begins and the festive atmosphere begins. "Once there were no boys' voices when compiling the band, so we got together. It met with a nice response from the audience and we still enjoyed it. We have prepared Jaslička's devotion in Soblahov. We filled the church to the brim, it took over and we have been doing it for 14 years, “explains the accidental formation of Škrupinka Jožko Ďuráči, noting that it is no coincidence that they were put together in this group.

"We have been meeting Ján Kováč on nuts for years. At first we just shelled the nuts into the Christmas cakes. Later, our women and children also joined us. We wanted the children to see that when families met, they could create something together. As in the past, when humans met with robots. In addition to cleaning nuts, we sing. The men break the nuts, the women clean it. Meanwhile, the children produce feeders for titmouse, booths, chairs, they are such creative workshops. We even bought a wafer machine and we bake Christmas wafers, "he describes the pre-Christmas traditions of the folklorist families. And it is during this nut tradition that Škrupinka was created, the name of which is derived from the nut shell.

Many folklorists also bring Christmas traditions to their homes. Vlad Mišík's family is no exception. On Christmas Eve, they can't miss the typical habits, even if they are preceded by long cleaning and long cooking. "My wife is from Turkey, so she brought some food and together we created a traditional menu. Cabbage, navels, fish. At Christmas, we drink little, in moderation, heat the mead or make soft grog from the juice. We'll have a glass of wine after dinner. "

Honey cross and no meat

The whole family meets at Jožek Ďuráč's, and there are eleven of them at the table. The youngest in the family reads a passage from the Gospel about the birth of Jesus. "I will bring holy water, wafers with honey and nuts in a straw box, put them on the table, pray, get a honey cross on my forehead and have a Christmas meatless menu. Cabbage with mushrooms fried in butter, sour mushroom, beans with onion and cheese braid, and finally a Christmas classic - fish with salad.

The festive part of Advent and Christmas is replaced by Štefan's untied fun. Škrupinka is part of the Furman tradition in Soblahov near Trenčín. Once upon a time, after two holidays, all the horses were taken out of the stables and barns, and the furmans took them for a walk "so as not to stop." Over time, the necessary act became a habit and the furmans met together in the villages or behind the villages. For several years, the Štefanská cavalry has been preserved in perhaps the only village in Slovakia, Soblahov. "We also sing carols, which pushes the Christmas mood into the inter-holiday period. Here on stage, we do not show a tradition from the past, but we accompany a living functional tradition.

The general public even comes here and it is a social event, "Vlado explains about the uniqueness of the event, where you can hear typical bagpipes, violins or ozembuch.

"We also have a zone dedicated to village crafts, we call them bicycle carols. The only problem is that we wouldn't get on stage with the bikes. It is a rebirth of the former custom, when the innkeeper, carpenter, firefighter, chimney sweep went from house to house ... It used to be a kind of village high society, which did not rise, but on the contrary, everyone liked to help, "Jožko presents uniformed carols.

It is said that Christmas is magical. Many customs have to ensure abundance, love, health. Everyone is looking forward to them and each of them will take what makes them happy.