Playful castles of the Trencin region 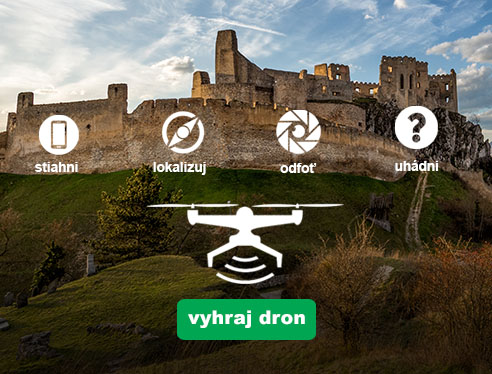 Playful castles of the Trencin region

After last year's premiere, we again set up a competition for families with children in the summer to find castles and ruins in the Trenčín region.

The essence of the game is to visit as many as 11 castles in the Trenčín region to get as many points as possible. The contest will be run through the Discovery mobile app, which is freely available for Android and iOS operating systems, and works in offline mode. The game includes three types of tasks: Localization, Photo Task, and Quiz task. In each of the castles, it is possible to obtain a different number of points, which depends on the combination of tasks that need to be fulfilled on the given castle. The contestant who gets the highest score in the shortest time wins the main prize - DRON!

CONDITIONS OF THE CONTRACT:

1. Recognition Competition The playful castles of the Trenčín Region will run from 1 July 2017 until 31 October 2017.

2. The organizer of the competition is the regional organization of tourism Trenčín Region with the seat K dolní stanice 7282 / 20A, 911 01 Trenčín

3. Anyone who has a mobile app installed on our mobile is available to play for Android and iOS for free. The player who wishes to participate in the game must first register for it.

A) GEO-LOCALIZATION - The competitor's role is to visit castles, castles and castle ruins in the Trenčín region and to confirm the visit to the mobile application in the given location (diameters). To complete the localization task, the competitor will get 5 points, identically at each designated place. The aim of the contestant is to visit 11 towns in the Trenčín region - castles, chateau, castle ruins. Uploaded points for localization will appear after connecting to the internet.

B) GEO-QUIZ - The competitor's job is to answer the competition question by marking the correct answer in the defined circle of the place. For the correct answer, the contestant will receive 15 points. Together, there are 8 quizzes in play, all of which are conditioned by a response in the designated defined circle of the place. Uploaded points will appear when connected to the internet.

C) GEO-PHOTO - The competitor's job is to take the place in a defined circle of the place. Together, there are 6 photographic tasks. The photo should capture the characteristic feature of the job. The contestant will receive 10 points for the photo. The photo may have a maximum resolution of 1500x1000 pixels. After the photo has been saved in the app, the photo will be sent to the server. Inappropriate photographs (photos from which it is not clear that it is a competition venue, photos with vulgar content, etc.), the organizer is entitled not to disclose and exclude the competitor from the relevant competition points. Uploaded points will appear when connected to the internet.

5. The mobile app is also functional in off-line mode (locating via GPS, quiz task response, photographed shooting in a photographic role). While playing, it is not necessary for the mobile to be permanently connected to the Internet. Connecting to the internet is only necessary to enter the replies to the list, for example, a tourist can do it after returning from the visited castle.

7. Competitors with the highest number of points will be rewarded at the end of the competition with the main prize - dron.

D) the number of points scored

E) diameter (radius from center of interest) to accomplish the task (defined circle).

A) a competition question and three answers, of which only one answer is correct

B) the number of points scored in the game

C) the diameter to complete the task

B) the ability to take a picture, pick a selected photo, crop a photo, and send it to the server

C) the number of points earned in the game

D) the diameter to complete the task

12. The order of visiting places and order of accomplishment of tasks is arbitrary.

13. A person who enrolls in a mobile app is Discovered on your mobile device is considered to be a contestant. By registering, competitors automatically agree to the terms of the competition.

14. Each competitor may have only one user account created.

15. The contestant may be located at one checkpoint only once during the whole competition. At the same time, he can only answer the competition question once and upload one photo to the app from the selected location.

16. The organizer has the right to exclude from a competitor's competition which points are fraudulent and does not comply with the competition rules.

17. The contact email entered at registration will only be used to send information about the competition and tourist news in the Trenčín region.

18. The personal details of the contestants will not be given to third parties.

19. The competition will be evaluated on 10 November 2017 at 10 am Central European Winter Time. By this time, you need to connect to the internet so that all points you earn are counted in the final ranking. The prizes will be handed over to the winners at the time and place, which will be published on the website www.trencinregion.sk.

20. The contestants will be informed by the e-mail they will submit when they enter the competition.