I have not slept on the tree yet 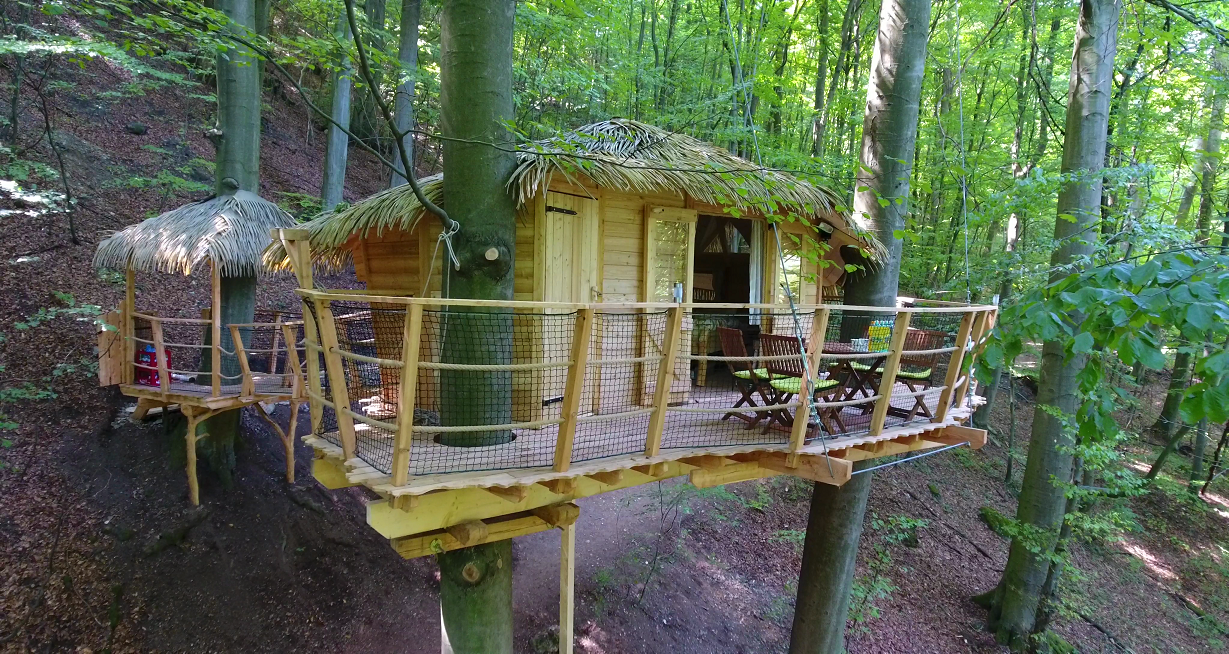 You have two guys at the age of seven and ten for two days. And you probably know that if nothing interesting is gone, they are immediately tired of boredom. Well, Grandpa, think! We need to find an activity that will appeal to us, not just children. After a short thought, we decided to go to nearby Trenčianske Teplice.

On the Internet, I search for the attractions of the spa town and the side of the house on the tree goes down. She immediately caught me because I did not sleep on the tree yet. My half gently indicated that I was about to go mad, but eventually I was "taken away" by this plan. In the reservation system, it was accidentally a night off from Saturday to Sunday, otherwise everything was occupied. Coincidence helped my shot idea, so we figuratively chose the Teplička stream. In the woods above the spa park, trees are hanging on the trees, which has been so attractive to us - the house on the tree. The boys were happy and, after the accommodation and brief lessons on safety and living standards at five meters, we went for a walk through Trenčianske Teplice. We were curious about what to offer to tourists with children.

The spa park and the neighboring forest are covered with many walkways. At the end of the park there is a pond, in my memory fixed with swans and boats, but there were no traces. So we went to the city center, but we did not get far. After several meters, our tourist group encountered a playground with various lounges, where Jakub and Philippe got out well. After a while when my teeth began to jump from the winter - it was 10º C - the boys were convinced of the necessity of moving even for seniors. Soon before, we saw a practice booth with simple reinforcing machines, where the glamorous heart was pleased and everything tried with the kids.

We were interested in marking the trees in the park with the description and place of origin. They come from all over the world and decorate the environment for relaxing for the spa guests and visitors alike. The boys have suggested that we "have measured" them, and so, to the joy of the passers-by, they have plunged into humbling the mighty tribes. Some of our extended hands were not enough to walk ... There is also a woody walkway along the edge of the forest.

We stopped short at the gaming tables with the actors' names on the Moste of Glory, and the young people knew only a few names, which is understandable at their age. The boys were more interested in the artworks between Kursalon and the center, commented on them, looked, looked like members of the jury.

He's hurting, but with wristbands

What would be a bath without bathing? The city offers tourists several options, open and covered swimming pools, thermal water, whirlpools, massages, relaxation. Everyone here finds what his soul desires. We have missed this part of the offer because of lack of time.

The first bonus for children was for us to sell spa baths. Maybe because they were fresh baked and played in hand. Winter-cold, the ice cream is pleased, we have dopied it and licked hard. It was a tremendous advantage that she did not bathe in the cold and did not have to save the clothes wearing a sweet smell. The cold weather eventually won over the curiosity of the tourists and drove us to the restaurant for dinner.

It was necessary to draw strength and heat for a long night. After a gourmet experience, we set off on our way to our little house. We came under the massive beeches on which the structure hangs. To the house leads the bridge, which underwent underneath, which made the boy so angry that it had to be brought in. We crawled on the bridge and put the shoes in plastic cases hanging on the railing. I was teasing my teeth instantly during the early morning exercise.

Inside, we were greeted by darkness. No switch, so we lit the batteries and lit the oil lamps hidden in metal lanterns. Everywhere, small torches and headlamps were prepared, and it was probably our most idiot. They ran with headlamps and illuminated everything and everything. They took their beetles on the floor, so they cleaned them and unloaded the door. We were waiting for a long evening, but I was looking for a heating switch, we had to help ourselves. We wrapped ourselves in the dock, and with the headlamps sitting on the bed they started with the cards. The youth drank us properly when I wondered where the boys learned how to handle the devilish pictures. The bed version of the game "Honey" came to the advice, do not move, we were better tactics to turn away the debacle.

Sometimes we get warmed up, drank, and get to bed. The path to the toilet was adventurous, the terrace was a dry toilet, a jar of washing water and a lavatory. "Why did my mother pack our toothbrushes? How do we use them? "Laughs James. Elder Philip tries to wash in the ice water, but he does not do much.

In the "room" there is a large double bed and a bunk bed, both of solid beechwood. Without a discussion, the boys took a bunk bed. The pillows were warm, they blew but pushed the uncovered part of the body out of courage, the temperature dropped even inside to four degrees. The rain began to rain, but it was not a disturbing sound. The rain had canceled Sunday program.

Breakfast on the lane

In the morning, I was surprised by the idea of ​​spending a normal half-hour with literature in the "printer". Forget, forget, sing Veronika Rabada and I'm sorry, nothing else is left to me. After an accelerated hygiene, we found that a basket with breakfast was hanging on the rope below us. His pulling up was an unusual experience, even more revealing his mysterious content. We found various kinds of food: salami, cheese, vegetables, fruits. We had breakfast on the terrace, clothes as for a skiing, eating too much for our eternal smoothies. We also found hot water in thermos, so there was no problem preparing tea or coffee.

After breakfast we handed over the accommodation and walked through the wet forest to the car. An unplanned short stay in Trenčianske Teplice is over, we will remember him for a long time. Maybe I'll come back here again, but we'll definitely try this romantic stay in warmer weather.