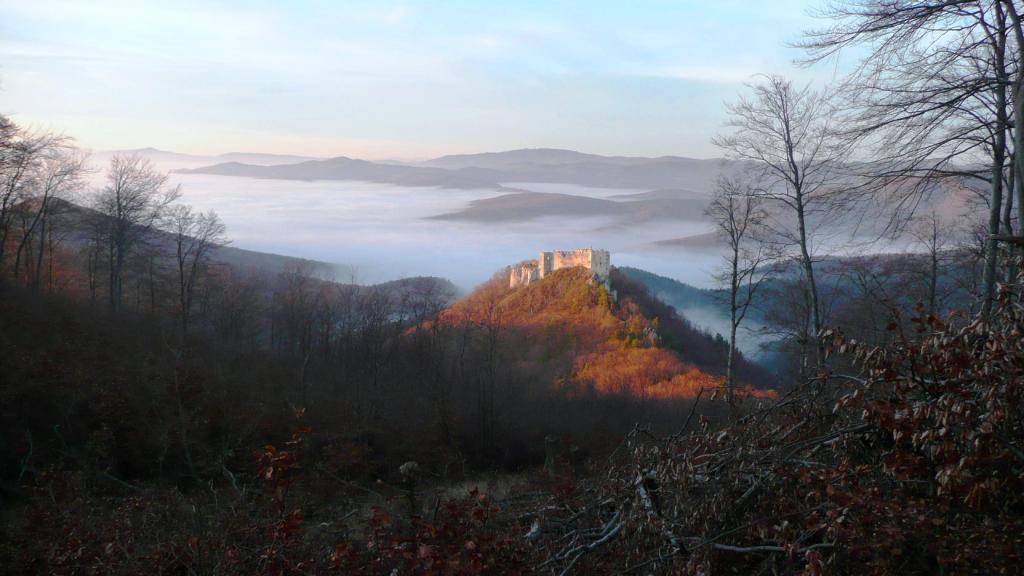 Dolina under the castle of Uhrovec hides mysteries, mysteries and unrepeatable atmosphere. Famous personalities of Slovak history were born here and all affected their destiny. People have not forgotten the picturesque villages of the Bánov district and live modestly, with a smile on their faces.

Report from the end of the region

"Go look at that cemetery. It enchants a special charm, "shows Mrs. Viera's finger at Uhrovsky Podhradí on the opposite hill. We park the car, the cemetery is a few meters away. She was right. The tombs are buried between two slopes that have shaped a sharp tile. It highlights the phenomenon of the entire valley, where I am breaking two worlds - the world of living and dead - especially now that we are experiencing the time of the Duchess, we mention the closest, well-known, personalities. The two great natives of Uhrov, the state-runner of Alexander Dubcek and climber Anton Dobeš, have been killed in mysterious circumstances. Dubcek died in a tragic accident when the luxury bavarian's chauffeur got a slip on the D1 motorway at Humpolec, ripped off riders and the elite politician, the central figure of Prague Spring, did not survive. Was it just an accident? Thoughts are still going on. Dobeša found her death again in the place she loved. His passion was mountains, he liked to conquer the highest shields of the world. The last exit from 2013 to the top of Nanga Parbat became fatal. The Pakistani militants attacked their camp and coldly killed his friend, friend Peter Šperk and other expedition members.

"You like to sit here in this tavern. I came here often, I met him, "says Jozef, who has a cottage in Uhrovsky Podhradí. A Nepalese prayer flag is hanging on the climbing hill, with Himalayan paintings on the walls. "He was a great man. He used to live in Uhrov but came here for beer. It is terrible that such a tragedy has occurred to him, "Joepf said miserably.

Uhrovska Valley was one of those areas in Slovakia, where the local mass fought in the SNP. On Jankov's tower near Uhrovca ​​was the staff of the partisan brigade of Jan Žižka. Today, one of the most important memorials and a sacred place of partisan fighting in SNP in Slovakia is here. Part of the grounds is a memorial symbolic cemetery, amphitheater and partisan bunkers. In Miezgovcia their people built up to twelve in early September 1944. Poltucet in the woods under Madac, the other half in Panská dolinke. "The Germans fired the village. In the bunkers, families were especially sought after with children who had fathers of partisans. Some served as grain stores. The roof was covered with a chestnut tree, slept on blankets and coats, "says Mayor Juraj Trgyn, and one of them leads us. "Some of the bunkers were even piecka, where they heated the water for washing or to wash the children. We have created at least one imitation of the bunker. Jams have been preserved, but after years, they have been absorbed, "he adds. At present, there are only 280 inhabitants in the village. "Every year this number grows. We have one great advantage that we have a final village, but only three kilometers from the district town, "explains Trgyna, who will not surprise anything. "One phone rang once on Sunday, and one gentleman came to Miezogiec from Martin to show me where we had three water springs. And he was right. "

While the Dolina hides a mysterious history, it also gave the nation a teacher of the nation. For example, Ľudovít Štúr on his native chest in Uhrov gave his identity to the Slovak people. He created poems, writing and burned with love to Adele Ostrolúckej. Exactly years after him, the light of the world in the same house in Uhrov was celebrated by another great Slovakian historian Alexander Dubcek. "That's just not what you see. Such a unique one will not be taken by our village, "said Mrs Anna of Uhrovca. To their natives, local people are proud and constantly seen in them. Their lives, work, and links can be seen in the Uhrovsky Museum, but also in the memorial rooms.

"The museum brings the daily life of the population closer to the young generation. The work, customs, clothes of our ancestors and important personalities who were born or here in Uhrov. It also represents the former factories, their products and the economic and economic potential of the village from the past to the present. It has seven expositions and 1168 exhibits that are divided into ethnological, historical and archeological, "explains Mayor Uhrovka Zuzana Máčeková. Together with Uhrovský Podhradí, Zitna- -Radisha, Omastina, Ksinna and Miezgovci and Horni Nastice, they created the Uhrovska Valley valley microregion. "Natural and historical wealth, folk crafts, culture, customs and traditions, their preservation for younger generations, interpersonal relations - this is also the mission of our micro-region," explains Máčeková.

A witness of the past past in Ksinna is the Roman Church of St Kozma and Damian. The interior and the exterior are decorated with medieval wall paintings. "They're going to have to restart," the local said. The inside church was burned down in 1949. Everything was destroyed, only the door remained. "Now the church is no longer used," the Kishnagans say sadly. Their hope is to be a gradual reconstruction that is financially demanding. From the two separate villages of Žitná and Radiše, in 1961 a joint municipality with the unified name Žitná-Radiša was established. At the end of the 18th and the beginning of the 19th century, the plague broke out in the village, and later the cholera and village lost half of the population. From this period, however, the reputation of the source of good drinking water under the hill Melka Rock was preserved.

It once led the way from Podhradie to Žitná. He is traveled that one day he took a wedding tour in this way, under which suddenly the land fell, and the weds and the horses poured water on the horses. No one has ever seen them. It is possible that there may be karst and other underground spaces or even caves.

The municipalities under Uhrovec Castle are beating the primate with the lowest number of inhabitants. "When I came here, there were a lot of people here. In every yard there were ten children, "says Mrs. Vierka of Uhrovsky Podhradia, which currently has 36 inhabitants. "And only half of them have a permanent residence, but they do not really live here," she adds. "I love you here in the summer. I have a piece of garden, flowers. It's enough for me to do so much. I'm glad I'm in the fresh air. There is also the silence that we can completely turn off and relax, "says Vierka, and the company makes him a dog Kubko. "Young people are no longer here. Go to the world and stay there. The mayor too does not come here. The office has a fire brigade house but lives in Senci, "explains the homeowner.

On the way to Uhrovský castle we meet a couple of tourists. "I come from Banovce, so I'm basically not a tourist. I'm here with a friend of Wendy, who comes from Amsterdam, "explains youngster Otto. Couple loves traveling, on his 1986 delivery he traveled a piece of Europe. "I'm such a nomad. We need little to survive, "he laughed. They have everything they need to survive, even a pie with a chimney on which they vary. Potulky also boasted them in the Uhrovská Valley. When we approached them, they just went with the waterbath to the locals. "They are very friendly and willing people. Slovakia is a beautiful landscape that offers many opportunities for relaxation, "says Wendy Holman. In the winding alley towards the castle they slowly lost. Uhrovský castle is one of the most preserved ruins in Slovakia. It turns off on the rocky peak of the ridge of the Strazovské vrchy, from the road you can see it only from a unique place. It is remote and difficult to access, yet it is searched for by many tourists. "When it's warm, it's busy from Friday to Sunday. We like when people leave and we have our peace, "concludes Mrs. Vierka. When visiting Uhrovska Valley we also think of Omastina. The local inhabitant tells us that the village has two ends. "Upper and lower, they were separated by their old, beautiful, buttocks, but they are no longer here. She took the side of the creek wall, so they removed it. My home but we know who is who of the lower and the upper end, "says the uncle, who lives here since childhood, since 1957." Slowly it here already dying, but recently moved two young families, "shows the hands of a highway upstream of a local stream. "It slowly dries, there is not enough water in it. But they cleaned him two years ago. There are caves, various holes, we have a beautiful ruin of the castle that is being renovated. Even when I went to the brigades, "she adds. People's architecture has also been influenced by popularity. The houses are here in a row-up area with typical elements of folk architecture. Chambers with heights were used to store things, but also to sleep. "They're dying," he smiles ujo of Omastine. "There are still unrestrained property-rights relations, a man does not know exactly who belongs to it. Nobody is there, "he says. The inhabitants of the villages under Uhrov Castle have a long list of events, legiend. Dolina still hides its secrets. Ktovie, of whom everything does not know and what remains hidden for the future. Maybe we will know once again ... It is true, however, that Uhrovská Valley is still more mysterious than any other day on Dushicky.