Welcome to the shamrock of traditions 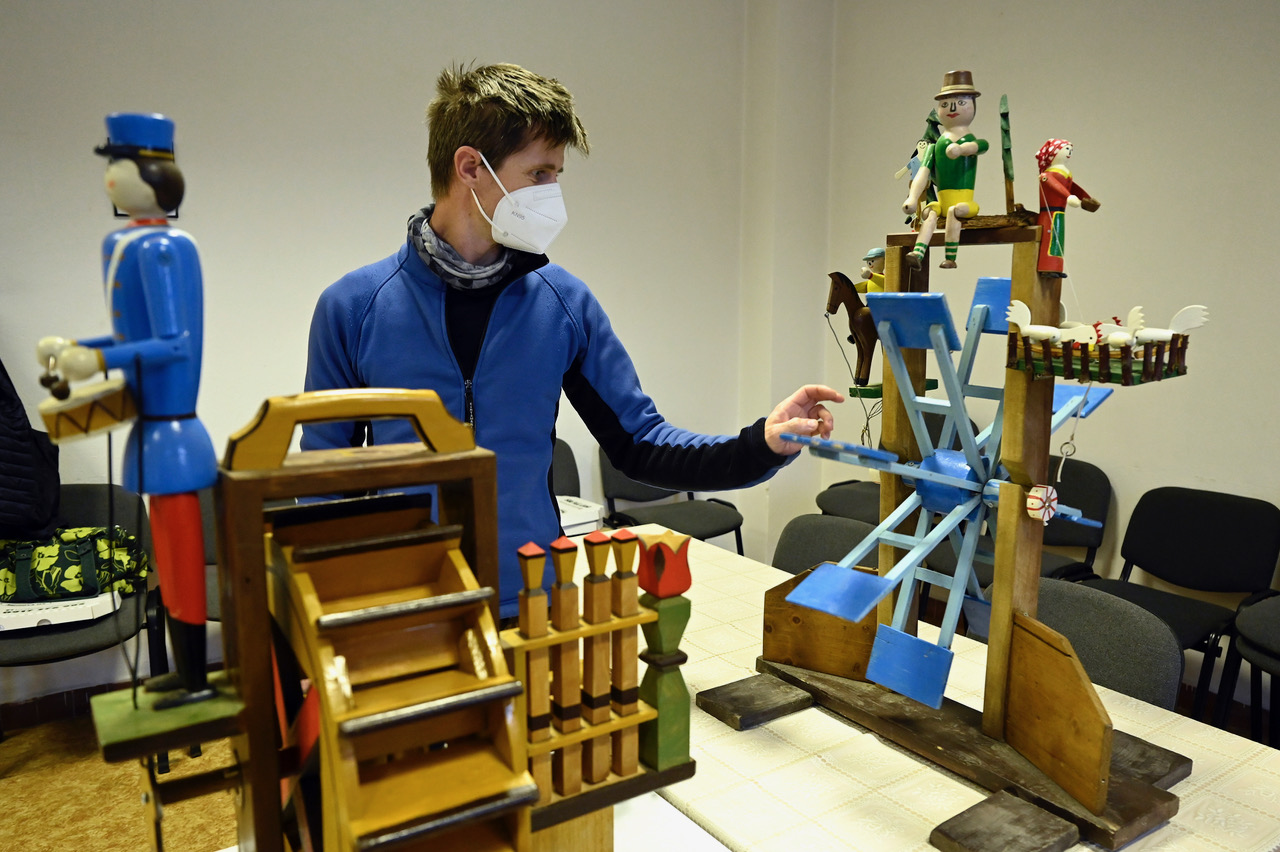 Our trip to the end of the region started this time with a nice event at the end of last year: Traditions in Hornonitrí - Working evenings near Tkáčov. It was a series of events, creative workshops, today young people would call it workshops. The patronage was taken over by the civic association Hornonitrie, which covers nine villages around the upper reaches of the Nitra River, just a few kilometers from its source. In Chvojnice, Poruba and Nitrianske Pravna, they decided to teach the craft of their ancestors and thus preserve the cultural heritage.

We come to Chvojnice on a narrow path, we pass picturesque houses and a stone unplastered church. The charm of the village is added by the fact that the signal on the mobile has been lost, so we can only focus on the upcoming event. "Historically, the territory of the village Chvojnica is connected with the production of wooden toys or utility wooden utensils. Until the beginning of the 20th century, there was a carving workshop here, where local boys learned the woodworking craft, ” says Radka Tarabčíková, project manager of the civic association Hornonitrie, about the history of Chvojnice carving. And precisely because of the historical connection with wood, visitors literally cut into the wood in the local culture house. Chvojnická smrečina is the name of a school of woodcarving and toy production, which was tried by the descendants of former carvers. They used the traditional method - the cut of folk motifs and the technique of making and painting wooden toys. The working evening was accompanied by lecturer Peter Lovas from the Upper Nitra Museum in Prievidza. “We make decorated pistons that were used for washing. They are beautified by the woodcut technique, in which we use only a knife. It carves various plant or geometric ornaments. At the time, it was the simplest decorating technique, ” he introduces us to the secrets of colored pistons. Our ancestors knew two types of pistons - one for washing and the other for mangling, which was ironed. At first glance, they were similar, although the latter was a bit longer and had a more interesting meaning. "The mangrove piston was also a gift of love. It was an object that a boyfriend carved for his girlfriend as a sign of affection, "he adds, adding that the young men engraved the initials of their loved one on the piston. In addition to carving, wooden toys were painted in Chvojnice, which were erected far and wide a century ago. According to the lecturer, Rastislav Haronik from Vyšehradný, a local part of Nitrianske Pravna, also has one of the original Chvojnice toys in his collection. It should be a Christmas pyramid with figures. It is a candle stand whose flames drove the propeller and it spun a small nativity scene. The inscription Fundstolen, which is the original name Chvojnice, reveals that it is an original toy.

During the creative workshops, contemporaries tried painting copies of turning toys that are in the collections of the Upper Nitra Museum in Prievidza. "If these events were not organized, people would forget what their ancestors ate in the past. Welcome to the shamrock of traditions they have been dedicated to. For example, the fact that toys were made in Chvojnice, “praises the organization of similar workshops by one of the mayors and the president of the civic association Hornonitrie Miroslav Dzina. The interest in working with wood or other traditions is also great among the inhabitants of Upper Nitra. It is nice to see historical artifacts in the museum, but when it comes to trying out the craft of your ancestors, they like to roll up their sleeves. Working evenings at Tkáčov for anti-pandemic measures have so far got a stop and we have to wait for the next one. You can take this as an invitation and wait for new creative workshop dates on the Hornonitria website. Working evenings at Tkáčov are concentrated in the villages in which they engaged in the craft in the past.

In Poruba, the contemporaries tried to create Pravnian embroidery with a full stitch. Pre-drawn motifs were used to help them. "We tried lace by netting. This is historically the oldest technique we use to create mesh bags, blankets, curtains or applications embedded in various fabrics. If you want, you can decorate it by embroidering patterns on the basic net, " we move to another village in Hornonitria with Radka Tarabčíková. Rastislav Haronik, who also has the original embroidery of wedding scarves in his collections, talked about the history of networking. The trio of workshops culminated in the Nitra Law in the workshop "U Tkáčov". For the past year and a year, young and old alike have been trying out carpet weaving. This time, in the creative workshop, they will focus on weaving the fabric, which according to the organizers is already a more demanding technique. Probably few people know how the dream warp or weft threads are twisted into the boat.

If you have so far felt that Hornonitrie is only educating and recalling the past, the opposite is true. The inhabitants of these municipalities meet at joint cultural and sporting events. They are often connected, for example as TOP goulash, where individual municipalities "measure their batches" and prepare the best goulash according to their own recipe. While tastes are intertwined in the cauldrons, a fight for the title of the best team takes place at the football stadium. However, Upper Nitra will not forgive even non-traditional, but even more entertaining disciplines. Who wouldn't want to be a master at nailing nails, peeling potatoes or drinking beer? There is no shortage of such gems at the events of the nine friendly villages of Upper Nitra.

And if you happen to be visiting the area at a time when there is no fun or historical event, be sure not to despair. Here you will find a number of marked hiking and biking trails that will take you from one part of Hornonitria to another. Depending on the season, interesting plants will catch your eye and mushroom pickers will also enjoy themselves after the summer rain.

By the way, mushroom pickers. For eight years now, the village of Malinová has hosted an exhibition of mushrooms, which are brought here by mushroom pickers from a wide area. This is not just a nice exhibition of nice pieces. The patronage over it was taken over by professional guarantors, members of the Slovak Mycological Society at the Slovak Academy of Sciences. "Every year we are looking forward to the exhibitors bringing as many types of mushrooms as possible, not only ordinary edible mushrooms, but also poisonous or unknown fruiting bodies. It is important to bring at least two or three fruiting bodies from one species, uncut but carefully selected from the substrate on which they grew. Whether it is soil or wood. For unknown species, it is good to remember where they grew. From the findings, the exhibitors can also create their own composition installed on a tray, " the organizers explain the conditions of participation. Every year, the exhibition also includes professional counseling centers, a review of professional literature and, most recently, the largest mycological encyclopedia in the world. Its author is Ladislav Hagara, a native of Upper Nitra and a mycologist of European format. Those who cannot find mushrooms in the forest can see a panel exhibition of photographs of well-known and lesser-known species in Malinová. At the same time, this exhibition is exceptional also thanks to the tasting of mushroom dishes. And it is already worth marking such an event on the calendar.

It would be bold to name all the interesting events across the villages of Hornonitria. There are many of them and we would definitely forget about one. Well, if you are thinking about where to go next for a trip, remember these lines. It is more than probable that something interesting will take place in one of the nine villages, or a virtual tour will motivate you to go hiking or walking through the villages. In several, there are museums with a link to the past. Somewhere the past intersects with the present. For example, in Tužina and its surroundings, our ancestors did gold mining. Today, gold digging is a sport, Slovak and international competitions are organized here. Upper Nitra is a historical area with a distinctive Slovak-German culture, which was created by both settlers and immigrants. It occupies the valley of the upper course of the river Nitra. From the north, the Hornonitria border is formed by the Žiar massif with the Kľak and Vyšehrad hills. One of its four districts is the district of Prievidza. In its northern part there is a legal valley with several villages. Nine municipalities Nitrianske Pravno, Nedožery-Brezany, Pravenec, Poruba, Kľačno, Tužina, Malinová, Poluvsie, Chvojnica are members of the Hornonitrie civic association.