The 20th year of the National Cyclists&#39; Meeting will be in Trenčín 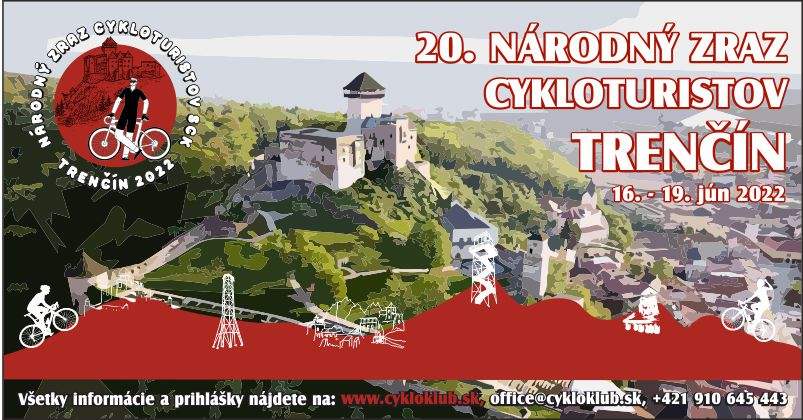 The Slovak cycling club is preparing a four-day MTB cycling stay full of cycling, rich program, good food and entertainment. Every day, the participants complete one nutritional route, on which they will get to know the attractions of the Trenčín region. Escort on the routes as well as an accompanying vehicle will be provided.

20. The national meeting of cyclists will take place on 16-19 June 2022. The participants will have the facilities created in the Veverica *** hotel in the Brezina forest park. In addition to cycling, there is a night tour of Trenčín Castle, interesting cycling lectures, a cycling cinema, as well as a birthday oldies party and a rich raffle. For more than 160 kilometers, the participants will "ventilate" the new cycle route from Trenčín to Nemšová, climb the ridge of the White Carpathians, visit three lookout towers and enjoy the steamed bun "Palúch" at Inovecká chata.

Registration for the stay has already started, all information about the possibility of registration can be found on the website of the Slovak Cycling Club

All ages are welcome

After the official opening of the meeting on Friday morning, a joint trip for approximately 70 km of cycling is planned. The beginning of the route is at a moderate pace, from the town of Trenčín along the newly built cycle path under the Pilgrimage site Skalka near Trenčín, all the way to Nemšová. It will continue along the cycle path along the Vlára River towards the border with the Czech Republic. A snack stop is also planned along the way. Subsequently, the participants will be waiting for the ascent to the ridge of the White Carpathians, sweaty T-shirts will be exchanged at the highest point Javorník, from which they will have a deserved pleasant descent for lunch to Horná Súča. On Friday, cyclists will still have a view of the ruins of the Dolná Súča castle and a stop at the Ibovka lookout tower.

The program will tighten on Saturday morning. Cyclists will be waiting for the ascent to the top of Inovec, where there is also a lookout tower. The reward will be a cold beer and "Palúch" at Inovecká chata. Refreshments are followed by a pleasant descent to Trenčianske Jastrabia, and following the former forest railway, the participants will move to the cottage under Ostrý Vrch and then back to Brezina.

On Sunday, cyclists deserve at least some such rest, and therefore the "meeting team" has prepared only a 40 km route for them, which will take them along the Kočkovsky Canal and lead them to the Dúbravka lookout tower.

Dozens of cyclists take part in the cycling event every year, riding in groups with a guide. There is never enough consideration, so the organizers draw attention to the increased number of cyclists in the vicinity of Trenčín, Nemšová and Trenčianske Teplice. They also draw the attention of tourists and cyclists who are planning this weekend's tourism in Považský Inovec to the increased number of people in the vicinity of the lookout tower.