From Skalka to Velehrad 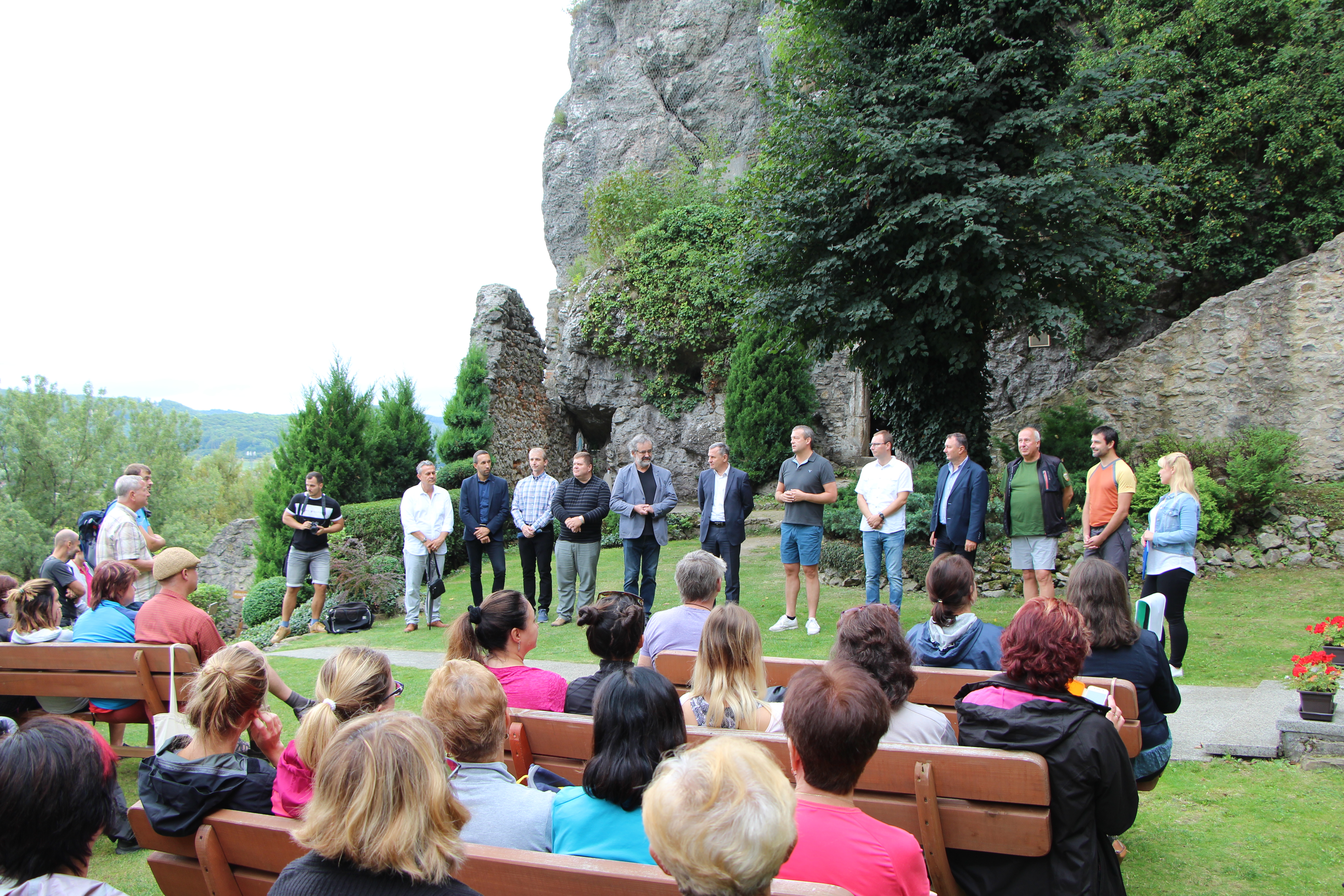 Skalka nad Váhom near Trenčín is considered to be the oldest pilgrimage site in Slovakia. Velehrad in the Zlín Region is one of the most important pilgrimage sites in Central Europe. Now they are connected by a new international Cyril and Methodius pilgrimage route. The pilgrims went to it for the first time on Wednesday, August 21, 2019. In the area of the former monastery in Veľká Skalka, the route was symbolically opened with the participation of representatives of the partner regions - Zlín and Trenčín.

"The Trenčín self-governing region is fully aware of the history and cultural heritage that St. Cyril and Metod brought to Great Moravia and I think it is very important to remember their legacy even now after more than 1155 years and I am very glad that Skalka nad Váhom, which is the oldest pilgrimage site in the Trenčín region and in the whole of Slovakia , is one of those places where pilgrims travel. I would like to take this opportunity to thank all those who contributed to its creation. TSK is only one member of the non-profit association of the European Cultural Route of St. Cyril and Methodius, which supports not only tourism, but also the preservation of culture and its heritage, which here St. Cyril and Methodius brought. At the same time, it is also a great support for tourism at present, ” said Jaroslav Baška , Chairman of the Trenčín Self-Governing Region, who was pleased with the cooperation.

As part of the activities of the European Cultural Route of St. In 2018, 300 km of Cyril and Methodius walking routes were marked by Cyril and Methodius, specifically in the Zlín and South Moravian regions . 75 km were marked in the Bratislava region . This year, marking continues in Moravia and Slovakia. The route leading from Skalka nad Váhom towards Velehrad is the first marked Czech-Slovak route, approximately 90 km long, of which 25 km is the Slovak part.

"Last year, we prepared sections of the Cyril and Methodius route leading to the stars in a star, especially in Moravia, and set out from Vranov near Brno to travel the pilgrim. Through the routes that show the formation of our cultural identity / cultural landscape, we declare an effort to bring closer, enhance and make accessible to the public both important and lesser-known sacral, medieval and other monuments. Our effort is to get the Cyril and Methodius route as an international project on the map of cultural routes of Europe, " said Ján Pijáček , a member of the Zlín Regional Council.

The August journey along the newly-marked pilgrimage route is planned for four days, during which a group of approximately 30 pilgrims will cover a 90 km long route. It leads mainly through the White Carpathians. First, the pilgrims will head from Skalka nad Váhom via Trenčín to Žítková, then they will visit Bojkovice, Luhačovice and head to Uherské Hradiště through the Prakšická vrchovina nature park. Arrival to the destination, Velehrad, is expected on Saturday, August 24 in the morning.

The pilgrims began their journey with Holy Mass with a blessing, then they heard the history of the pilgrimage site Skalka and together they went to the 1st section from Veľká to Malá Skalka, where they received commemorative letters. With them, they did not forget to pack a good mood and the pleasure of discovering beautiful natural nooks and crannies that await them along the way.

The initial journey along the Czech-Slovak route of the Cyril and Methodius route was prepared by the non-profit association European Cultural Route of St. Cyril and Methodius in cooperation with the Regional Tourism Organization (KOCR) Trenčín region, the Tourist Board of East Moravia, the Slovácko Region, the Skalka nad Váhom Pilgrimage Site, the pilgrim Peter Hirsch, Matica Velehradská, the Zlín Region and the Trenčín Self-Governing Region. The marking of the route was provided by the members of the Czech Tourists Club and the Slovak Tourists Club.