The castle ruins of the Trenčín region through the &quot;window&quot; into the past 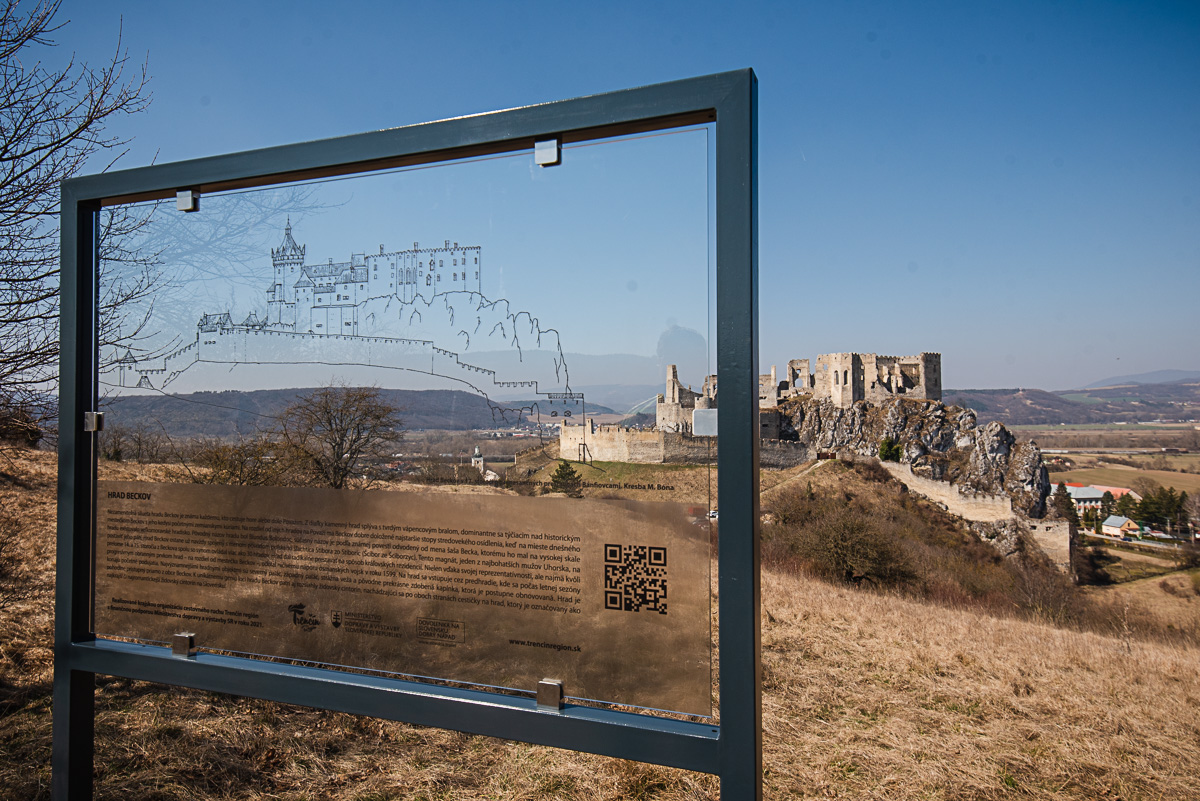 Regional Tourism Organization (KOCR) Trenčín region has taken care of Slovakia's uniqueness! In collaboration with experts, she created transparent graphic panels on which line drawings complete the missing parts of the castles. The tourist thus gets a picture of the original contours of the majestic castle walls with a single glance through the glass panel.

In places with an ideal view of selected castles and castle ruins of the Trenčín region, glass panels grew, which became an imaginary window into the past. "Imagine that while wandering through nature, you come across a place with a beautiful view of the castle ruins. What did the castle look like? What is missing from the castle? That is why we decided to install transparent graphic info panels in such places, near the castle ruins, which can answer these questions for tourists ", says the executive director of the regional tourism organization Trenčín region. The chairman of KOCR Trenčín region, Juraj Gerlice, adds that the selection of plots on which the boards will stand was more difficult in practice than in the project's visions: In the end, however, we managed to find the ideal piece of land in the case of 7 selected castles. Currently, 5 out of 7 boards stand in Beckov, Čachtice Castle, Lednice, Tematín Castle and Vršatec. The Považský and Trenčín castles will soon complete the seven. ” He admitted that in the selection of localities, they also took into account the attractiveness of the place, the proximity of tourist and educational trails.

In the field photographer with a frame

Before preparing the materials and graphics, a professional photographer took part in the event. "After consulting with the expert and author of drawings, architect and castle scientist Martin Bón and photographer Stanislav Hladký, we decided that the drawing will be based on current photographs. So we went through all 7 castles with a temporary wooden frame in the dimensions of the prepared panel, according to which the focal length was set and the individual castles were photographed, "said Pavol Štefčík, project manager at KOCR Trenčín. According to the pictures made, line drawings were prepared, which were then pressed onto the glass panel filling. "The drawings of academic reconstructions of castles are based on current knowledge from monument research, as well as on historical depictions of these buildings. The drawings thus interpret and enliven the defunct form of the monuments and by placing them in the field of view of the visitors, they allow them to move back several centuries directly in the field, " said graphic designer Martin Bóna. He mentioned that the most demanding was the summarization of historical data and documents, the drawing itself was already published for 3-4 days.

7 stone guards of the Trenčín region through the glass

The finalization of the project was preceded by a "fitting" graphics. In order for the drawings on the boards to be the right size, height and angle, the terrain had to be mapped again for focus. "The construction itself or parts of the board were not difficult to make. The biggest problem was to bring the material to the place of installation. The terrain to the castles was in many cases difficult and without an access road ", said Branislav Delinčák, managing director of ARDSYSTÉM, which took care of the production of panels and their installation. "The panel filling consists of safety tempered glass, which breaks into small pieces without sharp edges if broken, which prevents a possible risk of injury, " Delinčák added.

Some of the panels can be found by the tourist near the castles, others have to be followed

In order for the whole drawing of the castle object to fit on the board, a different distance of its location had to be chosen for each of the 7 castles. A view of Beckov Castle in its 17th-century Renaissance dress will appear if a tourist walks towards the plum alley on the sidewalk behind the castle and chooses to turn left at the crossroads. At Čachtice Castle, the panel is difficult to overlook, it is located directly in front of it, on the rocky slope of the driveway on the left side. It's more difficult in Lednice. However, a green tourist sign will lead the tourist to the board in the direction of Lednice rock gardens. Tourists can get a view of Tematín Castle at the end of the 17th century if they set out on the way to or from the castle towards the Bezovec recreation center following the blue tourist sign. They can compare the current form of the ruins of the Vršatec castle with its theoretical form near the Hotel Vršatec, where the panel is mounted next to the tourist map. A plaque depicting Trenčín Castle in the second half of the 16th century can be found by the sidewalk and the cycle path between the old and the new railway bridge in Trenčín. After the installation of the last of the 7 panels, which depicts the contours of Považský Castle, the board will clearly not be visited by people, while walking along the Vážská cascade, near the Church of St. Ladislava in Považský Podhrad.

What's on the glass got on the paper

The drawings of the academic reconstruction of the castles and their comparison with the current state of the castle ruins were also published in printed form. The result is a publication entitled "History of Yesterday and Today" , which included 7 castles from the Trenčín region plus 3 castles from the East Moravia region. The material will be available for Slovak tourists at Beckov Castle, Čachtice Castle, the Municipal Cultural Center in Nové Mesto nad Váhom, the Municipal Information Center in Dubnice nad Váhom, the PX Center in Považská Bystrica, the Púchov Information Center and Trenčín Castle . Beyond the Slovak-Czech border, the public will find the publication in three places - Brumov Castle, Lukov Castle and the Information Center in Koryčany .

The project was implemented with the financial support of the Ministry of Transport and Construction of the Slovak Republic.

The publication entitled "History Yesterday and Today" is the output of an international project of the same name, implemented with the use of funds from the Small Projects Fund of the INTERREG VA SK-CZ operational program.